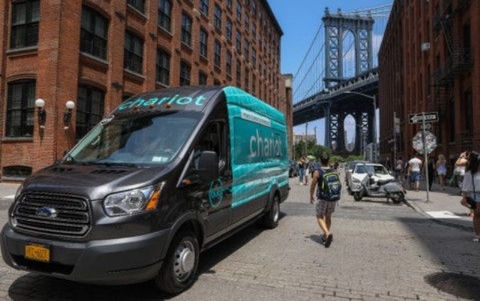 As New York City commuters cope with major transit system repairs and delays this summer, a new Chariot awaits them. Ford has just entered the public transit business with 14-seat shuttle buses, according to a July 27 announcement by the automaker.

A new Ford subsidiary, Chariot, will enable passengers to crowdsource their routes and to reserve rides via a smartphone app. The two debut routes, starting this month at a flat rate of $4 per ride, will run from the Lower East Side to Midtown in Manhattan and from Greenpoint to Dumbo in Brooklyn.

New York is the third market in which Chariot will expand as Ford grows its mobility services; Chariot plans to have 60 vehicles in operation in the city by fall. The new public transit subsidiary already has 200 vehicles in San Francisco and about 50 in Austin.

“Our mission … is to provide reliable, safe and affordable transportation for as many people as possible,” said Chariot CEO Ali Vahabzadeh, who has been with Ford Smart Mobility since 2014. “We want to connect people more easily to where they want to go—whether they need help making it to a transit hub or live in an area underserved by public transportation.”

In a July 27 TechCruch interview, Vahabzadeh commented, “I think the public is going to use Chariot and micro-transit in different ways [in NYC],” he said. “Using Chariot in Brooklyn when the L-[subway] is shut down, or event-based transit, for example. We can keep these running around the clock, with high-participation occupancy rates, so we’re going to learn a whole new set of lessons we can add to our playbook.”

In addition to commuter service, Chariot is launching enterprise and charter services in New York City. Enterprise is available for companies that would like to provide shared commutes for their employees, while charters allow users to directly book a private 14-passenger Chariot for day trips or events.