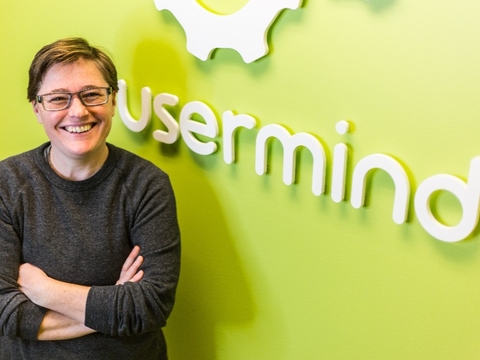 Michel Feaster dropped out of Harvard University, but that hasn’t stopped her from developing integration software that improves customer experiences as CEO of Usermind.

Usermind brings together information within companies so relationships with customers can be seamless.

“Companies collect and analyze more data on their customers than ever before, but unfortunately that data is not stored together,” Feaster told FierceCEO. “Companies don’t have a clear, unified record of who each customer is or a customer’s historical relationship with the company, which makes it nearly impossible to personalize engagement.”

As a result, timing can be completely off, leading to ill will with a company.

For instance, Feaster said, a sales rep from your cable company will try to upsell you when you’ve been experiencing repeated outages. Or, you buy a big-ticket item like a mattress or a winter coat only to be followed around the internet with ads for the very thing you already bought.

Usermind’s software will track a customer and engage with them if there are any issues, Feaster said.

The software also works within companies whose different departments have disparate systems so they are operating in a vacuum.

“We help systems and teams in companies communicate with each other,” Feaster said.

Feaster is an atypical entrepreneur. She left Harvard in her sophomore year and from there she worked in convenience stores.

Then the computer boom hit in the late 1990s, and she was hired by Compuware. She held a number of positions at other computer companies and then decided to start her own enterprise.

The move was born out of her love of computing, “and big things,” Feaster said. She feels “the biggest thing happening in technology is the reinvention of sales and marketing with software.”

There was also a personal reason to strike out on her own. “For a woman, the more powerful you get in a company, the less liked you are,” Feaster said. “More women should leave their company and start their own because it’s far easier to be a founder and be successful.”

Usermind is backed by $46 million in venture capital, with the last round, $23.5 million, secured a few weeks ago from Northgate Capital.

The financing will be used to expand into Europe and scale sales and engineering, Feaster said. Ultimately, the plan is to take Usermind public. But right now, Feaster’s love of the large is in in play.

“Our goal is to build an independent, standalone company,” she said. “I think you could build a billion-dollar company in this space.”

What are important traits for a leader?

It starts with the customer.

The technology market changes so fast. What will be the next tech shift?

What do you know now that you wish you knew 5 years ago?

What being a CEO is and should be doing.