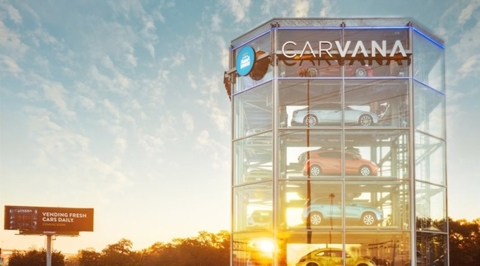 Phoenix-based Carvana, a 5-year-old startup that describes itself as the “Amazon of cars,” according to a report in Fortune magazine, sells used cars online in 33 markets, with a current inventory of 7,300 vehicles.

Customers pick out their cars from the Carvana website and then can schedule a delivery or go pick up the purchased car from one of Carvana’s five multistory, coin-operated “car vending machines.” In about two dozen markets, Carvana offers next-day delivery.

The company describes Carlypso’s product offering as complementary. No price was released for the acquisition by either firm.

According to a report on TechCrunch, Carlypso works like this: A seller enters information on the car into Carlypso’s website, then the company provides a ballpark figure of how much money it could fetch using a proprietary pricing algorithm that uses local data from dealerships and successful listings.

Carlypso then sends an inspector from its nationwide network of certified mechanics to inspect the car, take photos and attach a “Carlypso [GPS] device,” which tracks the vehicle for when potential buyers come for test drives. Carlypso also formats a “for sale by owner” listing, and helps post it across a number of outlets.

"We've admired what Carlypso has been doing from a distance, and when they walked us through the technology, we realized how unique their solutions were,” Carvana CEO Ernie Garcia commented in a company statement. “Seeing Carlypso's ability to scour disparate data sources to better understand each vehicle, to leverage that data to understand the relative value of vehicles and to turn that into actionable intelligence in real time with local market context to efficiently acquire vehicles on behalf of customers, made it clear to us that we would be a great team.”

Carlypso co-founders Chris Coleman and Nicky Hinrichsen have assumed leadership roles at Carvana. Coleman is overseeing vehicle data acquisition and normalization. Hinrichsen is running wholesale and trade technology. Both are contributing to Carvana’s strategies for centralized inventory acquisition, as well as instant valuation offers for consumers looking to sell or trade in their vehicle.

“When studying wholesale and retail prices in late 2014, we serendipitously discovered abnormally high spreads on some vehicles, which presented amazing deals for our customers,” said Coleman. “We became obsessed with decoding opaque vehicle data to extreme accuracy in order to find a wider range of inefficiencies in the market. We’d transitioned from an online car dealer to a data science company. Bringing our insights to Carvana, the biggest disrupter in our business, meant we could keep innovating with even more horsepower.”