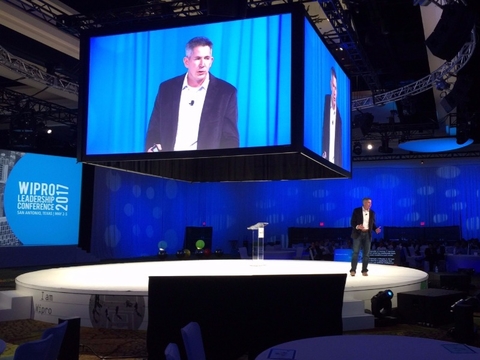 Mike Morris, CEO of Topcoder, is all about solving technology puzzles.

His company takes requests from companies to build specific software programs, applications or algorithms, and essentially crowdsources them. Instead of Topcoder’s employees creating them on their own, it turns those requests into an online competition for its 1.2 million-strong network of programming freelancers that live all over the world.

Those freelancers come up with proposals for software programs that will solve that challenge, and the company that submitted the original request picks winners. Topcoder has done this with customers such as IBM, GE, Honeywell and Land O’ Lakes.

For instance, a large oil and gas company Morris cannot name wanted to find spots where oil was likely to be. The company had reams of data but needed an algorithm to pinpoint locations. Topcoder was contacted, and the company held a competition that turned up promising locations.

The technological crowdsourcing is very effective, reaching 1.2 million programming freelancers, a number that is growing through viral word of mouth by 50,000 a quarter, Morris told FierceCEO.

Topcoder gets a service fee from the client companies, with the amount depending on the project’s size. Large companies spend millions of dollars annually on multiple projects, where a one-off project might cost $25,000, Morris said.

Morris has been with Topcoder since it was formed in 2002 and worked his way up the ranks to become CEO in 2015.

“Our goal is to be the marketplace of choice for freelance designers, developers and data scientists,” Morris said. “To do so we have to grow the demand of companies that need these services.”

Topcoder is doing this by selling directly to businesses and partnering with large technology companies.

Challenges include the company’s structure, where a broad swath of people are working remotely, which poses issues in communication. There are also time zone differences and, at times, issues with language differences.

To deal with these matters “we need very good technology tools to enable sharing of data, intellectual property and project tracking,” Morris said.

The company has had its share of challenges as it has grown. Mistakes have been “overcomplicating what we’re selling” and “not making marketing a core discipline,” Morris said.

Also, “not focusing on the customer enough by not making Topcoder easier to use,” Morris said.

Topcoder has 85 employees and mostly hires through referrals from existing staff. Morris looks for “people passionate about our business model, smart, trustworthy and fun.”

As a leader, Morris aims to foster a team culture, direct lines of communication, “saying it like it is and demonstrating the passion you want to see in others.”