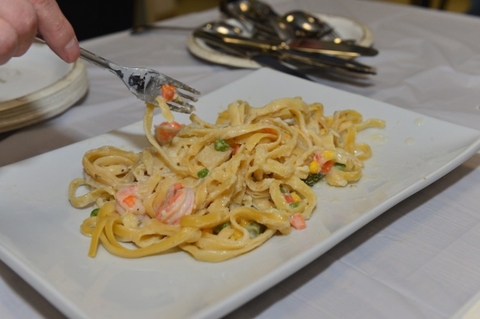 Serve up the ready-to-eat pasta! Amazon is working with 915 Labs to try military technology for home-delivered meals. (915 Labs)

Amazon is investigating a technology first developed for the U.S. military that produces scrumptious ready-to-eat meals—such as a beef stew and a vegetable frittata—which do not need refrigeration, Reuters reported on August 11. Such meals would be easy to stockpile and ship via the company’s AmazonFresh service, which claims it has been delivering groceries to customers’ homes for a decade. It also could complement Amazon's $13.7 billion purchase of Whole Foods and Amazon's checkout-free convenience store, which is in the test stage.

The pioneering food-prep technology—dubbed microwave-assisted thermal sterilization, or MATS (PDF)—was developed by researchers at Washington State University. It is being brought to market by a venture-backed startup called 915 Labs, based in Denver. The method involves placing sealed packages of food in pressurized water and heating them with microwaves for several minutes, according to 915 Labs—which said that the process enables the dishes to retain their natural flavor and texture. (Reuters)

Since its inception nine years ago, online hospitality service Airbnb has faced questions from people of color over whether the company's worldwide "vacancy" sign really applied to them, according to an August 9 report by National Public Radio (NPR). Now, as part of its attempt to turn that image around, Airbnb has announced a partnership with the NAACP, an organization that advocates eliminating race-based discrimination.

The goal is to put teeth in the home-sharing company's anti-discrimination efforts and to expand inclusivity for the number of Airbnb partners and shares earnings. The company has revised its policies and introduced more stringent penalties for hosts who are found to discriminate. What’s more, the announcement comes amid the NAACP's attempts to bring the organization closer to the younger activist audience that it hopes will be its next generation.

The NAACP and Airbnb also will collaborate on a series of projects to support Airbnb’s ongoing efforts to increase workforce diversity, as well as support Airbnb’s supplier diversity goals. Airbnb currently provides access to millions of unique accommodations from apartments and villas to castles and tree houses in more than 65,000 cities and 191 countries.