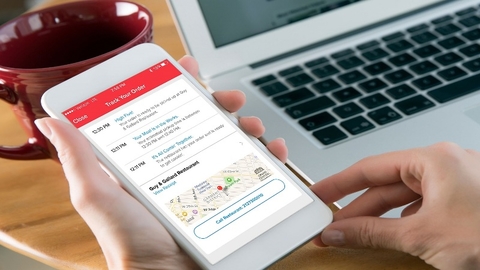 In a deal designed to spur electronic food takeout and delivery nationally, Grubhub is partnering with Yelp and acquiring Eat24. (Grubhub)

The paper menu soon may be obsolete. In a deal designed to spur electronic food takeout and delivery nationally, Chicago-based Grubhub, an online and mobile food ordering company, announced a long-term partnership with San Francisco-based Yelp, a site that posts crowd-sourced reviews of local businesses and provides a connected restaurant reservation service.

As part of the pact, Grubhub will acquire Yelp's Eat24 food ordering and delivery business, and Yelp will integrate online ordering from all Grubhub restaurants into its extensive local goods and services platform.

The long-term partnership agreement between Grubhub and Yelp has an initial term of five years, commencing upon the closing of Grubhub's acquisition of Eat24. Additionally, Grubhub has entered into a definitive agreement to acquire Eat24 for $287.5 million in cash, subject to standard closing conditions, including the expiration of U.S. antitrust waiting periods. Grubhub's acquisition of Eat24 is expected to be funded through a combination of cash on hand and debt.

According to a release from the two companies, they envision that the deal will benefit both their own bottom lines and their customers in the following ways:

On Aug. 7, Morgan Stanley analyst Brian Nowak upgraded Grubhub shares to Overweight, on his belief that Grubhub will benefit from its enhanced scale, even as competition from rivals Uber and Amazon grows, according to a report by Barron’s.

Despite all the buzz, Barron's notes that online food delivery still isn’t very popular—just 6% of Americans having tried it, according to Nowak’s estimates. What’s more, those who do order food online don’t seem to shop around first. Morgan Stanley’s recent survey work shows that 60% of Eat24 users haven’t tried Grubhub in the past six months. That lack of overlap means Grubhub stands to win new customers once it brings Eat24 in-house.