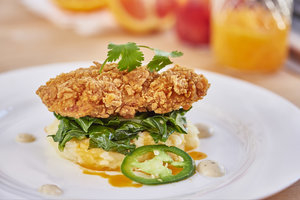 First, there were turkey burgers and veggie burgers. Now, a San Francisco-based startup called Memphis Meats is producing beef, chicken and duck directly from animal cells—without raising and slaughtering livestock or poultry—and it has major investors, including Bill Gates, Richard Branson, Jack Welch and one of the largest global agricultural companies, Minneapolis-based Cargill, according to an August 24 report by Bloomberg.

In its latest round of funding, led by venture capital firm DFJ, the private, “meat alternative” company has raised $17M. Memphis Meats CEO Uma Valeti would not reveal how much money each investor contributed, nor the terms of the deal, SFGate said in an August 23 story.

A Mayo Clinic cardiologist by training, Valeti already has a relatively long track record as an entrepreneur. He has co-founded or invested in several medical device and food tech startups.

Co-founder and Computer Security Officer Nicholas Genovese, Ph.D., “is a stem cell biologist, a meat lover, and a vegetarian,” he says in his bio.

“Our goal is simple,” the two executives say on their website. “[We want] to change the way meat gets to your plate. We're developing a way to produce real meat from animal cells …. We expect our products to be better for the environment (requiring up to 90% fewer greenhouse gas emissions, land, and water than conventionally-produced meat), the animals and public health. And most importantly, they're delicious.”

To date, the company, which was founded in 2015, has held private proof-of-concept tastings for beef meatballs, fried chicken and duck a l’orange. Valeti says that Memphis Meats will continue to refine its work on meat based on these three animals, as well as others he would not yet discuss.

This is the latest move by an industry that is increasingly addressing the tastes of millennials, who are driving demand for organic products, a focus on food that’s considered sustainable, as well as greater attention to animal treatment.

"I’m thrilled to have invested in Memphis Meats,” Branson said in an email in response to questions from Bloomberg. “I believe that in 30 years or so we will no longer need to kill any animals and that all meat will either be clean or plant-based, taste the same and also be much healthier for everyone.”

To date, Memphis Meats has raised a total of $22 million, signaling a commitment to the “clean-meat movement,” the company said.

Other companies also have entered the “clean meat” arena, according to Bloomberg: Tyson Foods., the largest U.S. meat producer, has created a venture capital fund focused on investing in companies “to sustainably feed” the world’s growing population; and in December announced a stake in plant-based protein producer Beyond Meat, which also counts Gates among its early funders.