Cashing in chips: Will U.S. employees use implanted chips for ID and purchases? 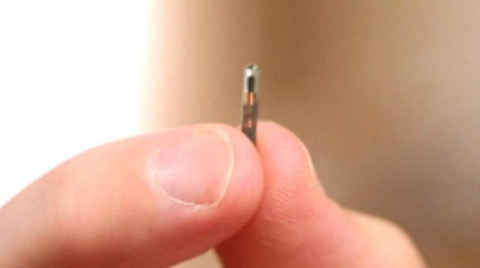 In a move that may presage either the pinnacle or the nadir of the cashless economy, depending on your level of receptiveness, Three Square Market (32M), of River Falls, Wisconsin, announced on July 24 that it is offering to implant chip technology in the hand of any employee willing to give it a try.

The size of a grain of rice, a chip can be implanted between the thumb and forefinger underneath the skin within seconds. The tiny chips will enable workers to make purchases in the company’s break room, as well as to open locked doors, log in to computers and use the copy machine—all without an ID card, a PIN or a retina scan. The company says it will pay the $300 cost of each chip.

Three Square Market—which has provided and stocked refrigerated kiosks called micro markets in nearly 20,000 break rooms nationwide in the United States since 2009—teamed with BioHax International of Helsingborg, Sweden, which is working on leading “our users into a seamless lifestyle via … smart biometric chip implants.”

Indeed, 32M predicts that more than 50 staff members out of 85 at its headquarters office will agree to have a radio-frequency identification (RFID) chip implanted.

“Eventually, this technology will become standardized, allowing you to use this [chip] as your passport, public transit, all purchasing opportunities,” said 32M CEO Todd Westby.

“When working with our operators over in Europe, we came across a company of chipped employees at BioHax International and the concept of using RFID with micro markets quickly grew,” said 32M VP of International Sales Tony Danna. “We see chip technology as the next evolution in payment systems, much like micro markets have steadily replaced vending machines.”

“The international marketplace is wide open and we believe that the future trajectory of total market share is going to be driven by who captures this arena first,” said 32M COO Patrick McMullan. “Europe is far more advanced in mobile and chip technology usage than the U.S. and we are thrilled with the growth opportunity this enhancement will bring to us. Thanks to our market partners in Sweden, we met this innovative company and look forward to working with them to take our market share to another level.”

This same technology was approved the U.S. Food and Drug Administration in 2004 for marketing to medical patients, according to a report by NBC News. The federal agency allowed Applied Digital Solutions of Delray Beach, Florida to market the VeriChip, which stores a code that releases patient information with the use of a scanner.