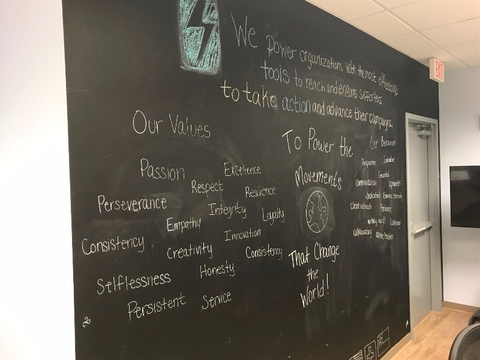 Jeb Ory wants people's voices to be heard and he accomplishes this through "digital advocacy."

He is CEO of Phone2Action, a software company that connects people—through mobile devices and other means—with lawmakers to let the officials know what’s on the person’s mind.

“In short, we are encouraging issue and digital advocacy, helping citizens to take a stand on the issues that matter to them,” Ory said. “My role is to make it easy for people to engage in things they feel strongly about.”

Users of the digital advocacy service click on campaign links from social media, text messages or email blasts. The campaign links have already been signed up for and range from tax reform petitions to calls for wildlife protection. The user enters their street address and zip code to look up their elected officials. They can then email, tweet, Facebook and even phone them. The system routes the messages into the recipient’s inbox in seconds.

Phone2Action has been operating since 2013. Its revenue comes from clients that want to disseminate their message. Among its 330 clients are The American Heart Association, Consumer Reports and Ben & Jerry’s, which is big on social justice. So far, more than 19 million messages have been sent out by users. Phone2Action itself is nonpartisan. It even has a Values Wall in its office to reinforce its ideals.

As to how he got into this business, Ory said, “I’ve always been interested in politics and policy and the intersection of technology.”

Prior to Phone2Action, Ory co-founded The App House, which published dozens of apps.

Ory said his biggest mistake with Phone2Action “was not hiring more sales people earlier in the company, as soon as we figured out our sales process. We would have more clients now.”

Challenges are plentiful, including getting the right talent, “You are competing against a lot of other opportunities,” Ory said.

‘You also want to stay ahead of the curve,” he said. “You can’t become complacent.”

His advice for people just coming out of school: “Do what you want to do. Discover things.”

For those already in careers, Ory said, “Surround yourself with people who are smarter than you and make sure you have a network that can be real with you.”

The company, which has a staff of 55, has raised $5.2 million in venture capital funding and is not yet profitable, using revenue to “reinvest in growth,” Ory said.