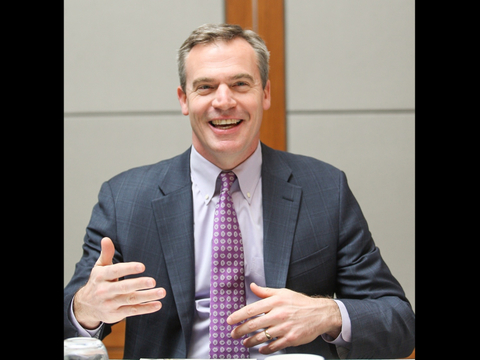 Wrenching decisions and a series of acquisitions have gone into what appears to be a turnaround for Extreme Networks under CEO Ed Meyercord.

The company was struggling to stay afloat a few years ago after the poorly executed integration of fellow networking vendor Enterasys in 2013.

Meyercord, who was with a telecom services provider and had been on Extreme Networks’ board since 2009, was asked by the company’s board to become CEO. What followed was a major revamping of operations as Extreme Networks laid off 300 of its 1,500 employees. The company also named a new chief marketing officer and chief revenue officer, among other executive spots, in an effort to restructure and align for future success.

“We hired from within” and “set a very forward strategy,” Meyercord said.

The product and leadership teams worked together to focus on what best served the needs of customers and then executed by developing these solutions. This meant focusing on developing the company’s core business of enterprise networking technology.

The company also began an acquisition strategy by taking out a large line of credit. Over the course of one year, it bought Brocade’s data center business, Avaya’s networking unit and Zebra’s WLAN business. Through these purchases, Extreme Networks has been able to work with top-tier customers like Walmart and FedEx, and sell a broader channel of wired and wireless solutions, Meyercord said.

“We started executing to focus on enterprise customers,” Meyercord said. “We wanted to play where we could win.”

The final acquisition of Brocade’s data center switching, routing and analytics business, completed this past October, has allowed Extreme Networks to compete with the top enterprises in the market, according to Meyercord. In other words, the company’s complete end-to-end solutions portfolio allows it to meet any customer’s need from the Wi-Fi edge to campus and all the way to the data center, he said.

So far, the strategy appears to be paying off. Extreme Networks has beat expectations and raised guidance for the last 10 quarters. The company is targeting posting $1 billion in revenue by the end of fiscal 2018, which ends in June 2018. This would make Extreme Networks the third-largest networking company in the world by sales, up from number 13 in 2013, Meyercord said.

Meyercord said a big challenge was “getting people to change; changing the corporate culture.”

A couple of hurdles along the way included “hiring decisions” and “the marketing and sales initiatives had to be corrected.”

Regarding hiring, Meyercord said he looks for team players who are candid, honest, curious, take ownership and are accountable.

So far, he said, the turnaround “has absolutely been a success.”