Curiosity.com is this CEO's way of educating enjoyably 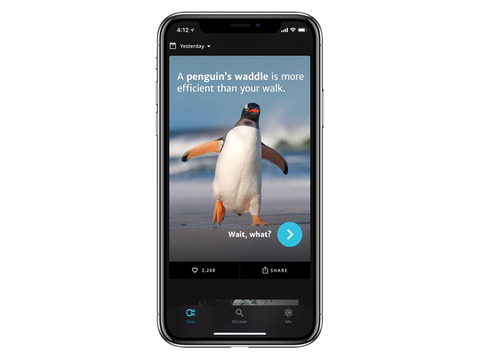 Lisa Weinstein said she sees an opportunity for a subscription model in Curiosity’s free app (above), which would have additional features of value to a paying consumer.

Ever wonder why the hair on your head grows long but doesn’t on the rest of your body? Or, why most North Americans buy their milk cold while the rest of the world takes it at room temperature?

Lisa Weinstein puts those questions and more to an audience of 75 million readers and podcast listeners through the media content publishing site and company she leads as CEO, Curiosity.com. The company creates, produces and distributes content for “the intellectually curious.”

In addition to the above examples, the site delves into places, products, food and culture, mind and body, personal growth and science and technology.

“We want to cover as many important bases as we can,” Weinstein said. “We hold a unique place with people who love to learn.”

These queries can cover just about anything, including, why did the Ancient Greeks purposely build their temples on top of fault lines? The theory is they saw the rumbling of the earth as a gateway to the underground.

Weinstein relishes the mind bogglers she puts out, complete with full length stories. She has been in her position for 2 months after being an adviser to it for three. She had been CEO of a media buying company and has held executive spots at several media agency networks. She thrives in the field because of its dynamics.

“I love to build and invent and reinvent and that’s what this industry needs,” Weinstein said. “It’s being disrupted by technology and disruption creates a need for change and new value creation.”

She said she sees an opportunity for a subscription model in Curiosity’s free app, which would have additional features of value to a paying consumer. Brand partners also continue to be a focus for the business as brands look to explore topics tied to inspiring everyday learning for the site’s audience.

“We’re growing, but you need to manage it appropriately,” Weinstein said. “I will say I am moving with an extreme sense of urgency.”

Fittingly, her hiring philosophy during her career has been to look for curious people who ask questions and have drive.

In general, “I love inspiring and leading people,” Weinstein said. “I love to lead a business to have a winning culture.”

As for the questions asked above: Hair grows long on our head to protect from UV radiation (since we started walking upright, it wasn't so important to cover every inch), says Curiosity.com. And milk is bought cold here because of the way it is processed.