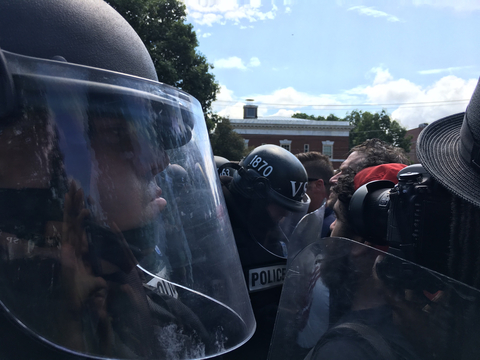 Police and protesters clash in Charlottesville, Virginia, in August 2017. (Evan Nesterak/CC BY 2.0)

As Hurricane Irma made its way through Florida last week, three police officers in Gainesville came to be known as the “hot cops” after a photo of them at work went viral. Soon one of them might not have a job after his anti-Semitic posts on Facebook came to light. But whether someone can be fired for their views or behavior outside the workplace is not always cut-and-dried, a lawyer wrote in the Harvard Business Review this week.

Jessica Clarke, an associate law professor at the University of Minnesota Law School, used another recent event to highlight the issue: the white supremacist rally in Charlottesville, Virginia, last month. As the protestors were identified, thanks to a social media campaign, their employers came under scrutiny for keeping them employed, and at least four participants lost their jobs. But questions surround the legality of firing someone who’s been exposed as a white supremacist.

“While private employers are not restricted by the First Amendment’s guarantee of free speech, they are subject to other limitations, such as laws forbidding discrimination,” Clarke wrote. “A number of states and localities, including California, ban discrimination based on political activity. These laws could apply to an employee’s attendance at a white nationalist rally. In some places, employers may be able to argue, as a defense, that the employee’s political activity interfered with his or her job performance.”

Litigation and business risks could come from retaining such employees when they bring their politics to work, she added. That’s because those workers expose their employers to discrimination lawsuits. “Employers should not retain workers who harass other employees or customers, who refuse to work in diverse groups, or who discriminate on the job,” she wrote.

Free speech rights don’t guarantee that a known white supremacist will keep their job. For instance, a New Jersey court ruled in 2003 that an employer was “justified in firing a gas station supervisor for selling Nazi paraphernalia on the internet in his spare time” because the employer had a “strong interest in regulating any appearance of discrimination,” according to court documents.

Things get murky, however, when an employee leaves their politics at home. Employers aren’t considered complicit in their off-duty activities, but employers “might want to fire an employee who stands for white supremacy to make a statement about the company’s own stand,” Clarke wrote.

In fact, about half of states have laws prohibiting employers from firing workers based on extracurricular goings-on, according to a Bloomberg article. Still, a rally attendee from South Carolina, which has such a law, lost his job after a photo of him at the event surfaced.

“It is perfectly OK to terminate somebody” in states without the “off-duty” protections, said Jay Starkman, chief executive of Engage, a human resources services firm. “The reason for the termination is that it doesn’t reflect the values of the organization.”

Ultimately, these issues can be tough for companies, which must walk a fine line between being seen as discriminatory and lawful. “You don’t want this to be political, you want it to be a decency vs. hatred issue,” Jonathan Segal, an employment lawyer at Duane Morris, told Bloomberg.