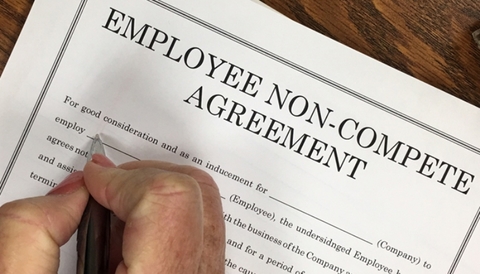 Should companies be able to enforce noncompete clauses that bar employees from working for competitors?(thelandlawyers.com)

San Francisco-based Veeva Systems, a provider of cloud-based software to the life sciences industry, has filed a lawsuit in California Superior Court–Alameda County (Oakland) against three competitors —Medidata Solutions, QuintilesIMS and Sparta Systems—in an effort to invalidate the noncompete agreements, confidentiality, and non-disparagement agreements that they have used to block other companies from poaching their workers.

Indeed, while California companies cannot use noncompete clauses in their employee contracts, out-of-state competitors can do so. That inequity enables non-Golden State companies to purloin Veeva’s workers (and confidential information), while Veeva is constrained from taking similar actions.

“Defendants do not share Veeva’s commitment to fair competition,” the company said in its filing, according to a report by Law360. “Instead, they seek to take advantage of Veeva’s commitment to the law by actively recruiting and/or hiring Veeva employees … at the same time … defendants seek to prevent Veeva from doing the same.”

The company hopes that “the case can set an important precedent in the enforcement of employment clauses that are illegal in states such as California,” Veeva said in a formal statement in mid-July.

As evidence, Veeva cited a study (Noncompetes in the U.S. Labor Force, July 1, 2017), which found that, “The widespread use of noncompetes impacts an estimated 30 million American workers, which reduces employees’ mobility and presents a potentially significant threat to innovation and economic growth.”

Further, the authors of the study found that “Noncompetes are more likely to be found in high-skill, high-paying jobs, but they are also surprisingly common in low-skill, low-paying jobs. We document that less than 10% of employees negotiate over noncompetes, that roughly one-third of noncompetes are signed after accepting the job offer, and that nearly two-thirds of job applicants had no alternative job opportunities when they were asked to agree to a noncompete.”

Specifically, Veeva is challenging a Medidata agreement prohibiting staffers from working for a competitor “anywhere in the world” for a year after leaving the company, a Quintiles agreement barring employees from publicly berating the company, and a Sparta stipulation preventing workers from belittling the company or its officers.

“Under the law in most states, companies essentially have the power to dictate where employees can work and keep them locked in jobs,” said Peter Gassner, Veeva founder and CEO. “We are taking action because people should have the fundamental right to use their skills and experience to advance their careers as they choose without the threat of being sued.”

“I’m thrilled to see broad action being taken to curb these unfair agreements. All workers should have the liberty to move between jobs and be free to compete,” said Orly Lobel, a professor of Employment and Labor Law at the University of San Diego. “Confidentiality and nondisparagement clauses can be as big a constraint as noncompetes. Our research shows that these anticompetitive practices can hurt employee performance, reduce company innovation, and hinder the economy.”