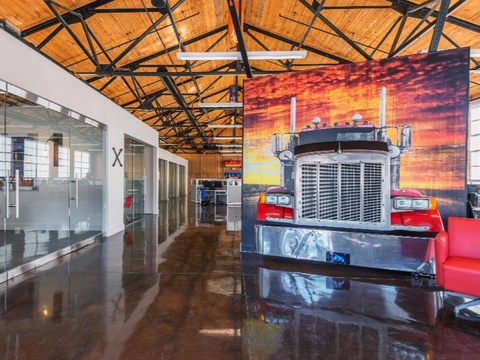 For Tana Greene, there is nothing like a good 18-wheeler.

Greene runs three companies that staff the trucking industry, putting drivers in the big rigs that crisscross the country.

Her newest of the three is Blue Bloodhound, a kind of Uber arrangement in which drivers choose their assignments. The company, started in 2015, is still finding its way because it is more concept-related than the traditional staffing placement approach.

But Greene is confident, saying she has the backing of 18 investors, including IT visionaries, Wall Street bankers and hedge funds.

“We all believe there is great potential here,” Greene said.

The launch of the enterprise has included a $1.2 million campaign to educate truckers about it. The tagline displays some of Greene’s own saltiness: “Go. Truck yourself.”

This from a woman who has learned the hard way to survive, with experiences including an abusive relationship and pouring everything she owned into her first trucking staffing company, Strataforce, begun in 1988.

“It had a rocky start to my life,” Greene said. “I knew if I was going to climb the ladder I had to build it myself.”

But she has kept at it.

Sandwiched between Strataforce and Blue Bloodhound is the second company, Road Dog Drivers, started with her husband in 2009.

RELATED: Small businesses get leg up on hiring with software

Her “whole reason for starting staffing was to get people jobs,” she said.

Her start came when she was working in manufacturing and saw a need for truckers, so Strataforce was started when she was 29 years old.

She used her own money, “sold everything” and worked two years “without taking a dime.”

The experience was a struggle of, “Are we going to make it,” Greene said. “You become very strong, very savvy.”

All, in all, “I love what I do every day even though there are a lot of hard decisions,” Greene said.

Her biggest challenge right now is handling three companies. But they all operate with core values, including “never settle and dare to be different.”

Her career advice is, “Understand your talent or gift and go with it."

As for the hiring she does for her own staff, Greene wants “people that care, first, and those that are driven to make a difference.”