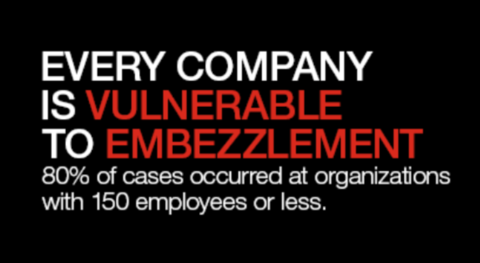 Every company loses money to employee theft, but a recent study finds that small and midsize firms bear the brunt. (Hiscox)

A full 95% of employees steal from their employers, according to a recent anonymous survey of 500 retail and service industry employees by New York City-based forensic accountant Kessler International. And it is not just office supplies they are taking. In many cases, staff members are skimming cash in small amounts over the long term.

Indeed, depending upon which source you check, employee theft cumulatively costs U.S. businesses between $50,000 and $60,000 a year.

Individually, a new study by Bermuda-based insurer Hiscox has found that U.S. businesses lost an average of $1.13 million in 2016 to their own employees. Small and midsize businesses were hit disproportionately, representing 68% of the cases. Their median loss last year was $289,864.

However, despite the alarming levels of plundering taking place, the problem apparently is not top of mind for many small business owners. When asked to identify the most critical issue facing their organizations, only 1% cited the threat of crime or vandalism, based on results of a CNBC/SurveyMonkey Small Business Survey of 2,030 self-identified small business owners released on September 12.

Still, worried or not, it’s a wise business owner who protects his or her own property. And when it comes to embezzlement, proprietors should be instituting checks and balances, Hiscox Crime and Fidelity Product Head Doug Karpp told CNBC this week. His advice: Never let one person have end-to-end control of funds. For example, "If they are an authorized signatory on a check, don't let them print a check out on the system."

Who should the owner keep an eye on? There is no definitive profile, but Hiscox told CNBC that the median age of perpetrators was 48 for women and 49 for men. And beware: In cases of funds theft, a startling 56% of perpetrators are female.

Worse yet, the perpetrators often come off as “diligent and ambitious," said Karpp. "They come in early. They are working late. They never take a vacation."

But their reason for camping out at their desks is not to help the company—it is to cover up fraud. "A lot of cases get discovered when the employee is on vacation," said Karpp.

In the end, he says, you may never recoup your business’s money—or the level of trust in people that you had before.

Let your employees know that now you are on the alert, he advises. "If you end up terminating the employee, you should press charges and publicize it within your company. That will show employees you take fraud seriously and help repair any damage to company culture that exists when employees are found stealing."