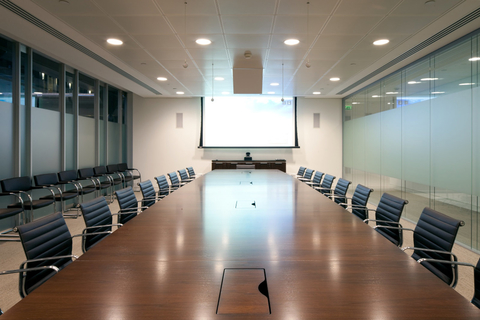 Only a handful of people are qualified to lead the boardroom, finds a new survey. (K2 Space/CC BY 2.0)

It’s no secret that chief executive officers, especially of large, publicly traded companies, earn big salaries—and people take issue with that. But one group thinks CEOs deserve even more, according to a new survey.

Ninety-eight percent of the 113 nonexecutive directors of Fortune 250 companies that three Stanford University researchers surveyed described the CEO job at their company as extremely or very challenging, according to an Oct. 5 CEO.com article.

What’s more, when asked how many executives could step into the CEO job at their company and perform at least as well as the current officeholder, survey respondents said fewer than four. That number went up by only two when the researchers asked the directors how many executives could become CEO at their biggest competitor and do a job that’s at least as good as the current CEO there.

Only nine executives would have the skills to turn around a company struggling in their industry, according to the article. “These are shockingly small numbers,” it stated.

The directors also sang CEOs’ praises, saying that they have “specific skills that are extremely hard to replicate,” and that top talent is critical for their company’s success, the article added.

These findings suggest that CEO salaries might need to be higher, the article stated. One reason for that is perceived scarcity of talent in the CEO market.

“The matching process for linking qualified talent with suitable job opportunities likely does not occur as economically as it does for other job types,” the article said. “With an inefficient labor market, management might face less pressure to perform and distortions can arise in the balance of power between the CEO and the board, and in compensation.”

A tight market for CEOs helps explain the high pay rates: “If only a limited number of executives are qualified to run these companies—and if outstanding CEO talent is critical for their success—then it is reasonable to expect that boards will offer large sums of money to attract their top candidate or retain their current CEO,” the article added.

To address concerns, directors need to conduct unbiased performance evaluations, put succession plans in place so that they can identify candidates to replace the current CEO prospectively and develop internal candidates to fill the position.

“Given the board’s familiarity with them, the visibility of their track record, and their tested cultural fit, it might be more economic for most companies to invest in—and retain—their best internal talent,” the article said.

Still, not everyone is lobbying for bigger paychecks. Steven Clifford, ex-CEO of King Broadcasting, recently wrote a book whose title is telling: “The CEO Pay Machine: How It Trashes America and How to Stop It.”

“This is a very corrupt system and it is based on assumptions that are indefensible,” Clifford said in an interview with Forbes. “It stuns me that no corporate board has really taken this on.”

For one, the book illustrates how CEO pay is correlated more to meeting short-term milestones rather than to overall good performance, the article states. This hurts all aspects of a company, including shareholders, pension funds and employees, it added, because the flawed structures cause CEOs to spend trillions of dollars in stock buybacks in order to drive up earnings per share, a metric that often leads to their bonuses.

“If I were a Fortune 500 CEO and 85% of my pay is coming in equity that’s coming from the stock price—I've got plenty of reasons to want to see the price of the stock high,” Clifford said in the interview. “Now, there’s two ways to do that. One—I could do the very hard work getting new products to market, beating the competition, reducing my cost, and having very creative marketing. And two—I can manipulate my stock price. And why would I not want to manipulate my stock price? I can make a lot of money. I can make fifty million dollars this year if I do buybacks of a million dollar buybacks—which is nothing.”

Corporate boards, which set CEO pay, have little incentive to change things, Clifford added, because board members risk being kicked off the board—or not invited to join others—if they get too curious.

Instead, change has to come from the outside—namely by becoming a political issue, he said.

“I think it's got to be people like you that pick it up and say, look, ‘Yeah, these guys are making a lot of money and it’s a serious economic and political problem and the boards are not going to do a damn thing about it,’” Clifford said.