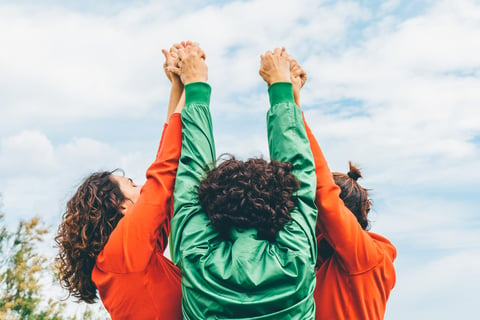 Being a woman CEO "takes an inextinguishable internal fire, a relentless entrepreneurial spirit and unmatched tenacity to succeed." (Image: massimofusaro/Getty)

They’ve been maligned, held in high regard and all measures in between. They are female CEOs whose journeys share common traits in some cases—and couldn’t be more different in others. For some, there has never been an iota of disparagement and for others it was an expected part of the job. But all speak with confidence, strength and vision as they carry titles that generally go to male counterparts.

“It’s not easy, but it’s possible, and it’s worth it,” said Sarah Tourville, CEO of Media Frenzy Global. “You have to be willing to take risks and understand that the stakes are higher for you as a female undertaking the role at the head of a company. The world is watching.  There’s a lot of pressure. But when you finally become the key decision-maker and leader in your own right, you feel a sense of accomplishment that refreshes your fire and only makes you want to fight harder for the next generation of female leaders.”

There are still “preconceptions about what females are capable of achieving, and a primary challenge has been overcoming these notions and constantly having to battle stereotypes at every stage of my career,” Tourville said. “Despite always having to prove myself beyond what’s required of my male peers, succeeding in my role as a CEO has its rewards. I learned a great deal about myself and developed an acute business sense that I wouldn’t have if not for the bumps and roadblocks along the way.”

Being a woman CEO “is comparable to training for the business Olympics,” according to Tourville. “It takes an inextinguishable internal fire, a relentless entrepreneurial spirit and unmatched tenacity to succeed in a world built for and made by men. Women encounter barriers and bias on a regular basis, and have to be creative about overcoming them.”

Jennifer Keough, CEO of JND Legal Administration, feels, “It’s awesome to be CEO and--female.  But the real reason the question is being asked is because there are so few woman leading companies.  So, my response to the real question is that it will be fantastic if and when the question I’m asked is simply how is it to be a CEO in your field?  We as a society aren’t there yet.”

Women can also help themselves, Keough said. “Sometimes they need to raise their hands and sometimes they need to demand a seat at the table.  Certainly, men are applauded for such aggressiveness while traditionally women have been criticized for it. If women want the brass ring, they should try to grab it.”

Krista Whitley, CEO of Altitude Products, looks forward “to a day when CEOs represent the diversity of our society and women leaders are just leaders. As a woman I have nothing to compare it to, but from what my male counterparts tell me, they rarely receive the condescension that I have experienced.”
Whitley said when she checks in for conferences or meetings with her male assistant, “people incorrectly assume that he is the CEO and I'm the assistant. When I was fundraising, an established investor told me it was ‘cute’ that I wanted to make money. Women are powerful forces to be reckoned with. I have yet to come across a speed bump, stereotype, or challenge that I cannot overcome with grace.”

As for managing a business, “Your organization can only grow to the level of your leadership ability, so personal growth is fundamental to the success of achieving my vision for our company,” Whitley said. “The greatest reward is the confidence of knowing that I control my own destiny. There is no glass ceiling or stereotype holding me back from accomplishing my wildest dreams.”

Whitley’s goal as a leader “is to blaze a trail so bright that it leads the way for future generations of little girls to grow up believing that they too, can come from anywhere, any background, any financial circumstances, or any small town to achieve great things and make a contribution to their community.”

Donna Murphy, global CEO of Havas Health & You, takes a similar view about striving for excellence. “Being a female CEO is not so different from being a male CEO—it’s about leadership,” Murphy said. “It’s about enjoying the ups and weathering the downs, having a vision of where the organization is going and steering it in the right direction, always with an eye on constant improvement.”

Murphy has “a passion for the business, and for our clients and for their businesses. Constant learning is another component. Regardless of where I sit in the company’s hierarchy, innovations and change are our lifeblood, and I consider myself a perpetual student, as well as the leader of a company that puts the highest value on learning.”

The way to become a CEO? “Hard work—seriously focused hard work—is at the heart of how I came to be CEO, but strong relationships nurtured me on my way up and through this organization,” Murphy said. “I take great pride in the impact our company has on its employees, clients, vendors and stakeholders. People are what make organizations great, and I consider Havas Health & You, and those it touches, part of my extended family.”

CarePort Health CEO Lissy Hu said the “most rewarding aspect of my role as CEO is building the team. It is very cool to work with people who are coming together to solve a problem that not only you care about. But a challenge is striking a balance between being inward-facing operationally and focusing on today, and also looking to the future and understanding how you need to evolve in the market. It’s a constant tension that you always need to be working at.”

In part 2 of this report, we'll hear from more women CEOs on the actions to take in order to reach the executive office.