Showing emotion at work not frowned upon anymore 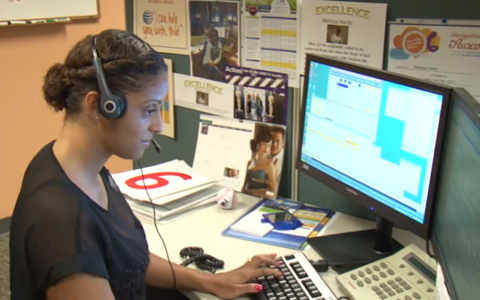 It is becoming more acceptable to show your feelings at work. (AT&T)

Expressing emotions in the workplace used to be taboo, but now employees and executives seem to be loosening up. More than 4 in 10 workers, 45%, have admitted to crying at work, according to a new survey from Accountemps. About the same proportion of executives, 44%, said shedding tears is acceptable as long as it's not an everyday occurrence.

Furthermore, employees are generally tougher on themselves than executives are: Around 32% of workers compared to 26% percent of executives said crying is never acceptable at the office.

Employees were also asked whether they ever cried at work. Slightly more than half, 55% said no, while the remaining 45% said they had.

"We're all human, and sometimes emotions can get the best of us," said Michael Steinitz, executive director of Accountemps, in a statement. "Workplace challenges are inevitable, but how you respond and move forward can demonstrate your professionalism, resilience and emotional intelligence."

Steinitz added, "Thinking before reacting will not only help your professional reputation, but also show that you are considerate of your colleagues. Frequent emotional displays can be disruptive to coworkers and ultimately damage your work relationships."

Many people have a negative perception of showing negative emotions at work, said Nate Regier, CEO of advisory firm Next Element.

“Why? Because oftentimes those emotions are expressed along with drama such as negative self-talk or personal attacks. But it doesn't have to be this way. Emotions of all types are OK to share at work as long as you take healthy personal responsibility for them,” Reiger said.

“While it can be uncomfortable for colleagues and bosses, crying and other emotions are OK at work, in moderation,” said Michael Perez, president of Nautilus HR.

“It's helpful for managers and colleagues to know where a person is and how to respond respectfully, knowing emotional intelligence is highly valued in today's workplace,” Perez said. “Being attuned to how others are feeling can help you grow as a team. If it's a persistent problem, it may be the sign of other things and a person should be referred to HR or an Employee Assistance Program counselor for confidential counseling.”

When it comes to crying at work, “the idea that professionalism is synonymous with rigidity and poker-faced composure is outdated,” said Jim Whitehurst, Red Hat CEO. “As a leader, I want to stoke the fiery passion behind associates’ ideas and convictions. You can’t ask people to bring excitement and other ‘positive’ emotions to the table, but expect them to leave everything else at home.”

"All that said, as with everything, there’s a time and a place,” Whitehurst added. “Instead of saying you should or shouldn’t cry at work, I’d encourage people to think about how they communicate their ideas at work. How do they show that you are excited about an idea? How do they show if they disagree with a suggestion? Take some time to reflect on how you show (or don’t show) emotions and if it’s helping or hindering your career growth and goals.”