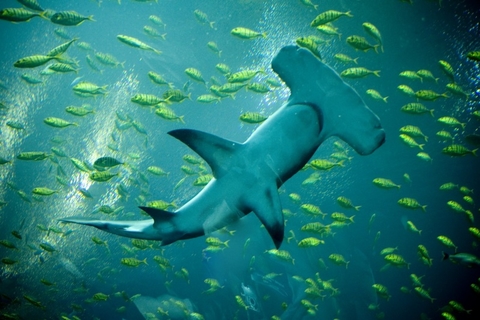 Swimming with the sharks is among the wildest team-building excursions that CEOs plan. (Bryan Scott/CC BY-NC-ND 2.0)

Many employees have been on team-building trips that required them to stretch their imaginations, their muscles, and their trust for their co-workers. But a few top managers really push the professional and personal envelope by asking their workers to dig deep for skills and bravery that they would never need on the job. For example, would you ask your staff to swim with the sharks? Supreme Sharks of Cape Town, South Africa, offers guaranteed corporate shark sightings that are not for the faint of heart. The firm promotes its cage dive encounters as "outdoor adventure trips that double up as team-building activities, as well as leisure trips." Or what about drilling down into team dynamics with spelunking and caving expeditions in the Canadian Rockies? Canmore Cave Tours in Alberta, Canada, offers a selection of above- and underground company outings in the evocatively named Rat's Nest Cave under 8,878-foot Grotto Mountain. Finally, for the “hottest” destination yet, the Dig This Las Vegas offers excavation programs in the Mojave Desert. Teams of five or six throw on hardhats and safety vests and compete to complete demolition and construction tasks, operating heavy machinery and playing out roles such as foreman, laborer and manager. (CNBC)

Trendy ride hailing service Uber Technologies is pursuing a top business leader to fill the vacuum left by the June 20 resignation of co-founder Travis Kalanick. Candidates for Uber CEO, including outgoing General Electric chairman Jeffrey Immelt, must be capable of restoring confidence in the company after months of controversy. Other candidates mentioned on the shortlist include Meg Whitman of Hewlett Packard (who withdrew from consideration on July 27), as well as Benchmark partner Matt Cohler, media mogul Arianna Huffington, Nestle SA’s Wan Ling Martello and TPG’s David Trujillo. Kalanick remains on the search committee. (Bloomberg)