Over $400B lost because of absent, groggy workers 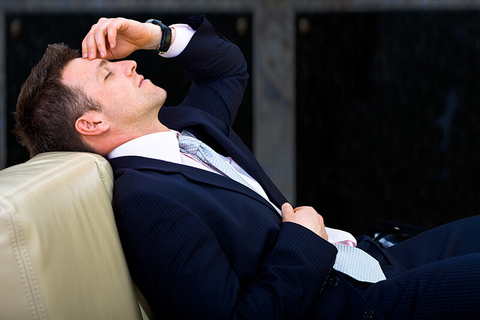 Employees are a groggy group.

Businesses in the U.S. lose $411 billion annually (2.2% of GDP) because their employees don’t come in due to lack of sleep or are groggy in the office, a survey has found.

The RAND study also found that even small changes to sleep duration could have a big impact on the economy, including if individuals who normally sleep under six hours slept even just one or two hours more, over $226.4 billion could be added to the U.S. economy.

“This is having a major impact on organizations,” said Alvaro Vaselli, CEO of Nuvanna, an online mattress seller. “It affects mental awareness, the key to getting work done.”

Also, according to a Harris Poll, three in four full and part time employees say they get less than eight hours of sleep on a typical work night, averaging just 6.9 hours of sleep. That is below the recommended amount of sleep, according to the National Institute for Health, which says most healthy adults (ages 18-64) need between seven to nine hours of sleep per night to function at their best.

Harder to get away from work

For many employees, a regular work day has become somewhat irregular. With technology allowing work remotely and flexible work schedules on the rise, employees are empowered to step in and out of work to accommodate their personal and family lives.

But with this advancement, the lines of when work starts and ends can blur, “potentially impacting the rest employees receive during the week to be at their best," said Carmel Galvin, chief human resources officer at Glassdoor, who the Harris Poll was conducted for. Sleep not only provides physical restoration to the body, but it is critical for cognitive function, concentration and productivity.

While the Harris Poll showed that working Americans are sleeping less than the recommended seven to nine hours, survey findings also suggested that it's not necessarily tied to demanding employers. Roughly three in four said their manager does encourage them to take time off when they need to take care of their health and wellness.

Plus, 87% of employees expect their employer to support them in balancing their life between work and personal commitments. However, there may still be a disconnect when it comes to employees taking rest and/or caring for one's health, as three in five (61%) employees acknowledge they would rather work when they feel sick than use their paid time off or sick time. Younger employees ages 18-44 (70%) are more likely to feel this way than those ages 45-64 (52%).

A previous Glassdoor survey found that working Americans are having a tougher time taking rest compared to a few years ago. Two in three employees who take vacation/time off reported working while on vacation, an increase since 2014 (61%).

The leading reasons among employees who work while on vacation include fear of getting behind (34%), no one else at their company can do the work while they're out (30%), they are completely dedicated to their company (22%) and they feel they can never be disconnected (21%).