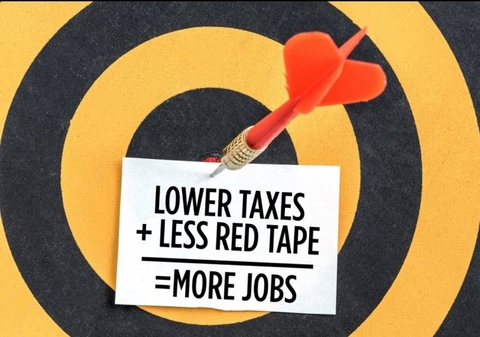 The campaign will urge lawmakers to pass a tax cut bill by Thanksgiving and make it retroactive to the start of this year. (JCN)

On Sept. 5, the Job Creators Network (JCN), a conservative advocacy group based in Atlanta, launched a multimillion-dollar campaign calling for small business tax cuts now, even as Congress returns to Washington to discuss a tax overhaul that could be complicated by Hurricane Harvey aid, Trump’s wall at the Mexican border, and a proposed debt ceiling hike, among other political footballs.

The campaign will urge lawmakers to pass a tax cut bill by Thanksgiving and make it retroactive to the start of this year.

Founded in 2014 by Home Depot former CEO Bernie Marcus, the JCN is led today by former Pepsi and Kraft executive Alfredo Ortiz. The mission of the group is “to educate employees of Main Street America, so we can protect the 85 million people who depend on the success of small businesses.”

In a formal release, JCN outlined how the requested small business tax cuts “would give long-overdue relief to hardworking taxpayers and how this would boost wages, jobs, and the overall economy.”

The advocacy group pointed out, “Small businesses are the backbone of the economy, providing half of existing jobs and two-thirds of new jobs, so what’s good for them is good for everyone.”

This finding, JCN asserts, “demonstrates that tax cuts would help workers through raises and new job opportunities as well as the broader economy through business expansion. With wage and economic growth only recently picking up, this finding suggests they could be turbocharged by tax cuts.”

The poll also demonstrates that tax cuts would ease the burden on the nation’s small business job creators, JCN says, characterizing the SMBs as a group that has been “struggling through years of overtaxation.” Half of poll respondents said that cutting taxes on small businesses is the policy proposal that would help them the most.

The campaign will comprise several major components, among them:

Ortiz, JCN's president and CEO, has released the following statement in conjunction with the launch: “A tax cut for small businesses and American families is long overdue. In order to generate the support necessary to pass tax cuts now and provide hardworking taxpayers with some relief, the public must understand the benefits of tax cuts including higher wages, more jobs, revitalized Main Streets, and a better economy. JCN’s Tax Cuts Now campaign provides this ammunition that is necessary to win the tax cut fight.”