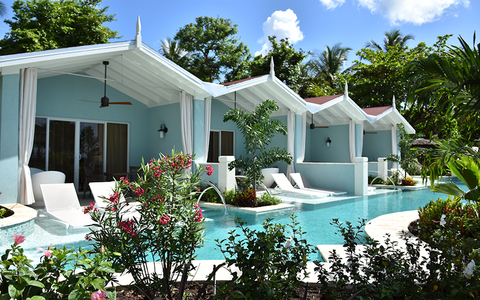 Paid paid vacations are one way companies are encouraging their employees to recharge. (Sandals Halcyon Beach)

To discourage the growing number of employees who opt to be “work martyrs,” or those who stay late and don’t take vacation, employers are putting new meaning in the term “paid vacation,” reports show. Nearly a dozen companies have put “paid paid vacation” policies into place, according to Business Insider, which defines the practice as “paying employees extra money on top of their normal salary to be used solely for vacations.”

Statistics show that U.S. workers are simply tearing themselves away from work less and less. A 2014 Gallup poll, for instance found that half of full-time workers said they put in more than 40 hours per week, with more than 20% reporting that they worked 50 to 59 hours, according to the article. What’s more, they’re not taking leave time, as indicated by a 2015 Project: Time Off study that showed that 55% of Americans combined to leave 658 million vacation days unused.

Why push people out the door? All work and no play can take a toll on employees, increasing symptoms of anxiety and depression, according to the National Institutes of Health.

“It’s in all of our employees’ great interest to take time to do what they love with friends, family, whomever (we’ll pay their vacation expenses too so long as you go with them) and disconnect for a few days, or a few weeks,” according to a 2012 Moz blog post.

Mark Douglas, chief executive officer of SteelHouse, a marketing and advertising company, pays workers $2,000 a year to travel anywhere in the world, according to the article.

Since implementing paid paid vacation, SteelHouse’s employee roster has remained largely unchanged: In the past three years, only five of 250 workers have left, states an article in the United Kingdom’s Independent. Workers returned recharged and productive, Douglas added.

Still, some companies embrace work martyrs, Business Insider reports. For instance, Erika Nardini, CEO of Barstool Sports, told the New York Times that she texts potential employees at off hours and allows them up to three hours to respond.

“If you’re in the process of interviewing with us, I’ll text you about something at 9 p.m. or 11 a.m. on a Sunday just to see how fast you'll respond,” Nardini said. “It’s not that I'm going to bug you all weekend if you work for me, but I want you to be responsive. I think about work all the time. Other people don’t have to be working all the time, but I want people who are also always thinking.”