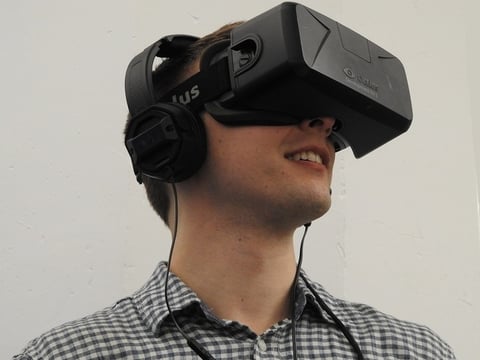 With virtual reality, the Navy can show potential recruits what it is like to be in the service.

You are deep in enemy territory, piloting a long boat down a river, with less than 10 minutes to save a Navy SEAL team pinned down by gunfire. Your craft cruises at over 45 miles per hour, but the noise might alert hostile forces to your approach. Now, night begins to fall and you squint into the distance as tension rises. And then you remember: It's only a virtual reality (VR) simulation, and you are wearing special headgear to see a technology-assisted environment that simulates the real world. This exercise is a way to show potential recruits what it is like to be in the service. According to Captain Dave Bouve, director of Marketing and Advertising, "It's an opportunity to start a conversation" with a potential recruit through a debriefing after the VR experience and through follow-up emails, Bouve told the Society for Human Resources Management on July 10. Bouve and others who use VR in recruiting say it's a way to differentiate an employer from others in a field. It helps solidify a brand. It illustrates what it's like to work for an organization. And it demonstrates an employer's commitment to cutting-edge technology. Online shopping firm Jet, German mobility and logistics provider Deutsche Bahn, and Commonwealth Bank of Australia also are among large businesses using VR in recruiting. Some colleges are even starting to use VR to recruit students. (Society for Human Resources Management)

When Madalyn Parker, a web developer at Olark Live Chat, sent her boss an email telling him that she would be taking a mental health holiday the next day, she was surprised at his reply. Parker’s CEO, Ben Congleton, got back to her in the best way possible. "I just wanted to personally thank you for sending emails like this," he wrote. "Every time you do, I use it as a reminder of the importance of using sick days for mental health. I can't believe this is not standard practice at all organizations. You are an example to us all, and help cut through the stigma so we can bring our whole selves to work." Now, thanks to a post by Parker, Congleton’s answer is trending on Twitter, Business Insider reported on July 11.  Nearly 10,000 people have retweeted her latest tweet, and many are responding with their own stories—both positive and negative. And Parker has a more positive outlook, herself. She has written about her mental health and working before—but now she says she is comfortable with talking about it on the job, an idea that used to terrify her. (Business Insider)

Apollo Global Management is betting that the slumping golf industry is finally getting out of the rough, according to a July 10 report by Bloomberg. The private equity firm agreed to pay $1.1 billion for ClubCorp Holdings, a country-club operator that has properties including California’s Mission Hills and the Woodlands in Texas. Apollo is gaining nearly half a million members in the bargain, providing a steady source of income. The deal follows a challenging stretch for the golf industry, which saw participation decline after a peak in 2003. Hundreds of courses have closed in recent years, rocking both retailers and equipment manufacturers. Golfsmith International, the biggest golf chain, filed for bankruptcy last year. And Nike, which had hitched its golf fortunes to Tiger Woods’ career, stopped selling equipment for the sport. ClubCorp’s investors will receive $17.12 a share in cash in the transaction, a 31% premium over the closing stock price on July 7. The shares rose to $17.06 on July 10, just short of the deal price. (Bloomberg)