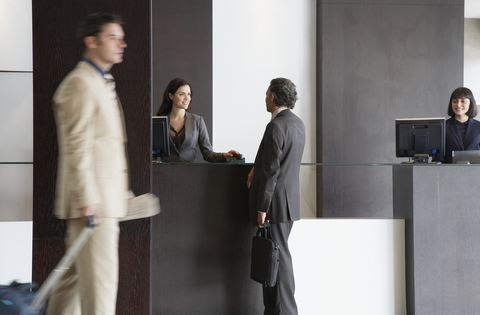 Employers are holding on to their workers. (Getty Images)

The report, issued by payroll processor ADP Thursday, could be a harbinger of the government’s non-farm payroll report that is scheduled to be released Friday. The government’s data will show payroll information for the public and private sector and provide the unemployment rate. The rate fell to 3.8% in May, an 18-year low, illustrating the difficulties companies are having bringing on employees.

"Business' number one problem is finding qualified workers,” said Mark Zandi, chief economist of Moody's Analytics, in a statement. “At the current pace of job growth, if sustained, this problem is set to get much worse. These labor shortages will only intensify across all industries and company sizes."

"The labor market continues to march towards full employment," said Ahu Yildirmaz, co-head of the ADP Research Institute, in a statement.

“In a tight labor market, it’s no surprise employers are hanging on to their current workforces,” said John Challenger, CEO of Challenger, Gray & Christmas.

Still, the situation may begin changing, Challenger says. “In the wake of announced tariffs, we may be entering a period of increased cuts going forward,” he said.

People generally upbeat about getting jobs

In general, Americans remain very upbeat about the job market, with confidence, according to one survey, at close to a two-decade high.

Some 65% of those polled in June said it is a good time to find a "quality job," similar to 67% in May, according to Gallup. These are the highest readings in the polling organization’s 17-year history of tracking this measure of employment sentiment.

And when it comes to simply finding a job, without the word “quality” in front of it, Americans are even more upbeat, with 75% feeling that is achievable.

Separately, Gallup said it has been seeing fewer Americans mentioning aspects of the economy as the nation's top problem than has been the situation historically. Some 56% of Americans say the economy is getting better, as high as that measure has been since 2004, Gallup said.

A less upbeat picture was painted by Paychex, which tracks small businesses. The organization late last week said in June its Paychex, IHS Markit index of business wage and employment trends fell to 99.40, its lowest level since 2010.

The showing came “as small businesses are having difficulty hiring in the very low unemployment environment,” said James Diffley, chief regional economist at IHS Markit, in a statement.

"Despite continuing tightening of labor market conditions, we’re seeing only modest levels of wage growth," added Martin Mucci, Paychex’s CEO, in a statement. “With the unemployment rate at historic lows, we’d expect to see accelerating wages in this type of employment market.”