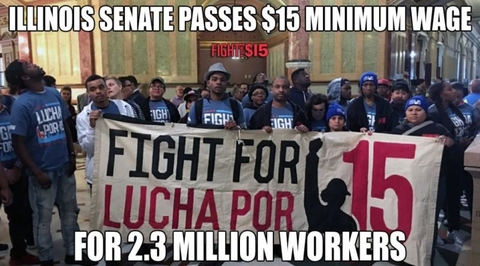 Illinois Governor has vetoed legislation that would have boosted the minimum hourly wage to $15 by 2022. (Fight for $15)

On July 1, Minneapolis became one of the first cities nationwide to adopt a $15 minimum wage; however, its southern neighbor Illinois has frozen hourly earnings at the current level.

On Aug. 25, Gov. Bruce Rauner vetoed a bill (SB0081) that would have gradually more than doubled the state's minimum wage from $8.25 to the same amount as Minneapolis’s by 2022.

The Republican governor, in a veto message sent to the legislature, said that he considers the hike too severe, according to a report by CNN.

However, much of his constituency disagrees. Members of the Fight for $15 movement have started to share messages on social media labeled #VetoRauner.

"The millions of underpaid workers in this state will remember Rauner taking food off our families' tables when we go to the polls in 2018," McDonald's worker Adriana Alvarez said in a statement on behalf of the group's Chicago chapter.

“Rauner should allow our state to join New York, California, the District of Columbia and communities across the country that are saying $15/hour is the new national standard for wages,” she said, adding, “If he chooses to side with billionaire CEOs and stand in the way of a raise for 1 in 3 Illinois workers, he’ll find himself on the wrong side of workers, the wrong side of voters and the wrong side of history.”

Gov. Rauner will be running for re-election in 2018.

In his veto message, Rauner cited a University of Washington study (PDF) on Seattle's minimum wage that caused consternation among advocates in June. The study found that low-wage workers in Seattle saw their hours drop by 9% when wages went up to $13 in 2016. It also said that hourly workers ultimately made $125 less each month on average.

"The most thorough research to date, published earlier this year by researchers at the University of Washington, found that for every 10% increase in the hourly earnings of low-wage workers, there was a 30% reduction in employers providing those jobs," Rauner said.

The report has been controversial, in large part because it undercut takeaways from a study released by UC Berkeley’s Labor Center almost concurrently. Researchers at that institution found that wages in Seattle's food services sector have grown and employment has not been affected since Berkeley’s minimum wage ordinance went into effect in 2016.

Meanwhile, Sen. Bernie Sanders, I-Maine, and the #Fight for15 are coming together on Labor Day “to take on the Republic lawmakers obsessed with slashing wages and attacking unions.” A signup sheet is available on the Fight for $15 site.

Read more on
Veto Fight for $15