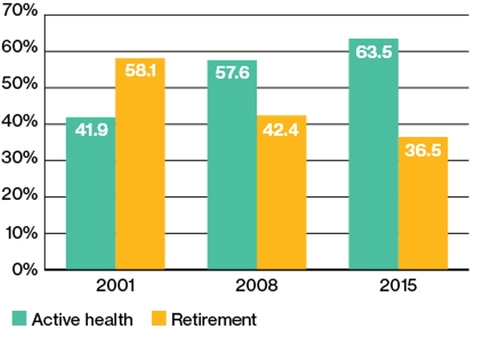 As the cost of providing benefits continues to rise—overall, 24% since 2001—many employers are choosing immediate gratification for their employees and themselves—in the form of health insurance that will keep their workforce robust and productive in the current marketplace—and are furnishing less to ensure their future security.

Indeed, results of a new study, "Shifts in benefit allocations among U.S. employers," released recently by consulting firm Willis Towers Watson, established that in 2001, healthcare costs for active employees comprised about two-fifths (42%) of benefits, while retirement benefits made up the remaining three-fifths (58%).

However, by 2015, that ratio had flipped, with healthcare benefits representing just under two-thirds of costs (64%) and the retirement share falling to slightly more than one-third (37%).

There has been a seismic shift that can be characterized as a tale of two benefit programs, Willis Towers Watson asserts: Healthcare benefits are eating up a larger portion of dollars while the amount spent on retirement programs is on the decline. This reallocation has major implications for employers and employees alike.

Specifically, during this period, healthcare costs for active employees more than doubled, rising from 5.7% to 11.5% of pay. Conversely, total retirement benefits, which include defined benefit (DB), defined contribution (DC) and postretirement medical plans (PRM), declined by 25% during that same period—from 9.1% to 6.8% of pay.

The analysis defines total retirement benefits as the combined value of DB, DC and PRM plans. Other benefits—such as paid time off, lifestyle and flexible benefits—are not included in the analysis.

“The rising cost of employee benefits remains a challenge as employers seek to get the most employee value from their pay and benefit programs,” said John Bremen, managing director of human capital and benefits at Willis Towers Watson, in a company statement.

Finally, the study suggests the reallocation of retirement dollars to healthcare benefits might not align with employee preferences and needs. While Willis Towers Watson’s Global Benefits Attitudes Survey, conducted in February 2016, found that employees value their healthcare benefits just as highly as their retirement benefits, many employees are worried about their current and future financial situations, and fear they won’t have saved enough for retirement and will have to work past normal retirement age.

“Employers may want to reevaluate the allocation of benefit dollars to better respond to employees’ needs and concerns,” said Alexa Nerdrum, senior retirement consultant at Willis Towers Watson. “This could consist of more tax-efficient saving mechanisms, such as the broader use of health savings accounts, as well as wiser spending on healthcare. While the solution for each organization will be unique, employers need to balance cost with the long-term returns on providing benefit packages that will be highly valued by their workers.”

The Willis Towers Watson analysis examined trends in employer costs for benefit plans since 2001 by examining a proprietary database of retirement and healthcare programs from more than 500 medium and large U.S. employers.