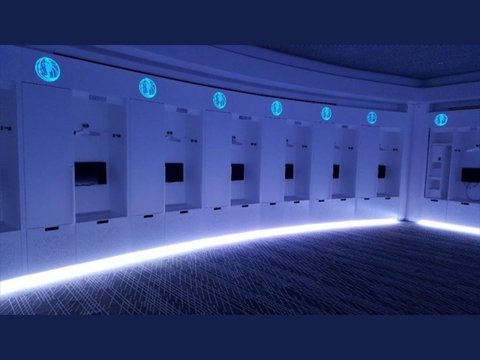 The Dallas Mavericks lockers are among the latest jobs by Hollman Inc. (Hollman Inc.)

Travis Hollman, CEO of Hollman Inc., is off to Mexico today with 26 of his staffers to thank them for a job well done last year and to rev them up for 2018.

The annual all-expenses paid trip to Puerto Vallarta is symbolic of the way Hollman runs his company, which makes high-end lockers.

“We want to keep this like a family,” Hollman said.

A typical birthday may find a cake on an employee’s desk. Food trucks regularly bring in lunch and breakfast is brought in. Gift certificates and sports tickets are given out.

“We do lots of things to keep our employees happy,” Hollman said.

The need is especially acute “with the workplace changing the way it has,” Hollman said. “We have a lot of millennials coming in and we have to figure out how to motivate them and keep them here.”

Another way is challenging work, and Hollman is incorporating more electronics into the lockers it makes.

Generally, though, “I really like people, getting them to perform at a high level and seeing what motivates them,” Hollman said. “It’s just exciting.”

Employees have to pass a relatively high bar to get in. “We write ads with key words that will bring in the type of person we are looking for and then delve into their lives (to the degree the law allows) and their goals,” Hollman said. “We want to make sure this isn’t going to be a quick job where they are just looking for money.”

And Hollman is “proud” when he sees newly bought cars in the company parking lot or someone wearing a new shirt, because it comes from those employees being part of Hollman’s success.

Hollman has built more than two million lockers since starting business in 1976. Its lockers can be found at nearly all US major golf courses, in hospitals and corporate centers and neighborhood gyms. Other clients include Apple (for its new headquarters), Google, The New York Times and Goldman Sachs.

These are not your average lockers. The locker room Hollman created for the Dallas Mavericks is 50 feet by 30 feet and has oxygenated air. It is outfitted with facial recognition software that opens and closes lockers, which contain TVs that display workout and nutritional information. Lockers for country clubs have burnished wood and stately chairs and tables.

“The whole notion of lockers has changed,” Hollman said. “They work with the rest of your organization. They are not a standalone system anymore.”

Hollman has been running the business for 7 years, since taking over from his father, who started the company.

Hollman is self-funded and has no debt. The company is currently doing $50 million in sales annually and Hollman sees that doubling within 3 years.

He’d rather remain independent, especially for his two children.

“I would pass the business on to them, hopefully, or at least pass along my work ethic,” Hollman said.

I never worked for anyone in my life. I just wanted to run my own business.

What is the most important trait for a leader?

A leader has to see the big picture to know where he or she is heading.

What do you wish you knew 5 years ago that you know now?

I would have told myself just to relax and move slowly toward your outcome.

Be out talking to your customers; they know where the revenue is.