Threats and promises: U.S. focuses on balance of trade in NAFTA talks 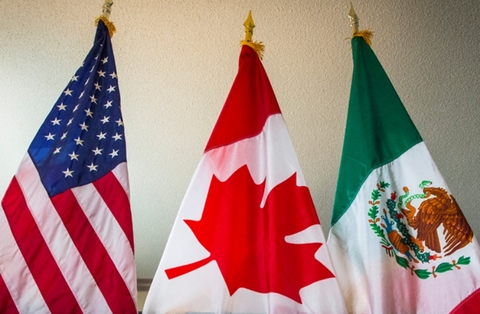 The U.S. and its trade partners, Canada and Mexico, will start NAFTA talks on a tense note. (Agri-Pulse)

“We feel that NAFTA has fundamentally failed many, many Americans and needs major improvement,” he stated.

Lighthizer warned America’s trade partners at the Washington, D.C., meeting that Trump has no interest in "a mere tweaking" of the accord. The president is pressuring for major concessions that will reduce U.S. trade deficits with Mexico and Canada—or he says he will pull out of NAFTA altogether.

The Canadian and Mexican representatives were outwardly affable in response to Lighthizer’s ultimatums, according to a report by The New York Times, emphasizing their commitment to regional trade and the benefits to be accrued from a regional alliance. However, both nations are adamant that the current agreement is not tilted against the United States.

Last year, Americans purchased $55.6 billion more in goods and services from Mexico—our third-largest trade partner—than Mexicans bought from the United States, the office of the U.S. Trade Representative disclosed. The Trump administration regards this number as a detriment of the current trade deal—evidence that Mexico is exploiting the United States.

Such trade deficits, Lighthizer noted, “can’t continue.” However, Mexico and Canada have countered that the U.S. focus should instead be on bilateral trade—saying that a nation may run a deficit with one trading partner and a surplus with another. What matters is the totality.

“Canada doesn’t view trade surpluses or deficits as a primary measure of whether trade works,” Canada’s Minister of Foreign Affairs Chrystia Freeland retorted on Wednesday, according to The New York Times.

In addition to the issue of tariffs, the United States intends to negotiate a deal for its auto industry by cutting down on imports of auto parts from countries outside the NAFTA region.

Under the current agreement, the Times reported, a car assembled in Mexico can be imported into the United States without paying an import tax, if at least 62.5% of the car, measured by value, was made in North America. The Trump administration wants to raise that bar, and to require that a significant portion of those parts come from the United States.

The Detroit-based United Automobile Workers union has long lobbied for this revision. However, automakers worry that, unless the nation continues to import inexpensive parts, they will not be able to hold down the cost of their final products.

There is also little if any congressional support, the New York Times stated, for the administration’s threat to withdraw from the trade agreement if Canada and Mexico resist improvements.

Representative Tim Ryan, D-Ohio, said Tuesday in response to Trump’s threats to pull out, that he was “being bombastic” was not following “the mature way” to seek changes.

“Ultimately you can have huge disruptions in the economy if you don’t handle this like an adult,” he said.

Read more on
Negotiations Balance of trade US Trade Representative