Steve Jones, CEO of Allied Universal, sees revenue for his security guard service doubling to $10B in next few years 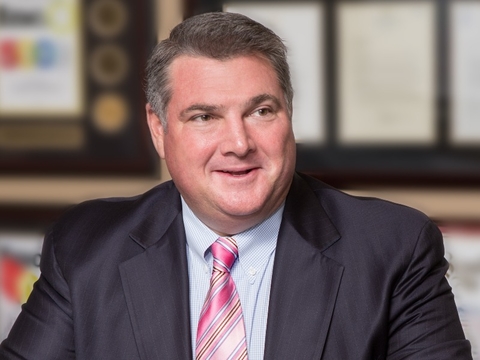 Steve Jones, CEO of Allied Universal, has set his sights on roughly doubling the security guard services company’s revenue to $10 billion in the next few years.

He plans to do this in two ways: through acquisitions in the consolidating industry and organically with new business growth. The company is also deepening its integrated services, systems and technology solutions, like robotics and global security operations center as a service (GSOCaaS), as 2020 approaches.

“There are still opportunities out there and given our branch office structure we have tremendous scale,” Jones said.

Allied Universal has a presence across the U.S., in Canada, the U.S. Virgin Islands and Puerto Rico.

The company got a big boost in 2016 when Allied Universal was created through the merger of AlliedBarton Security Services and Universal Services of America.

The new firm, with headquarters in Santa Ana, California, and Conshohocken, Pennsylvania, had 140,000 employees and annual revenue of $4.5 billion.

Just two years later, Allied Universal now has over 150,000 employees and $5.5 billion in revenue thanks largely to the six acquisitions since the merger.

Jones said his security professionals—the company does not call them guards—are in 200 of the Fortune 500 companies, many of the nation’s malls, bus terminals, commercial real estate, manufacturing & industrial, HOA and municipal and governmental buildings, among other vertical markets.

Sept. 11, he said, was a seminal moment. “It changed everything,” he said. It brought with it an ongoing threat of terrorism, but there are other challenges that now require heightened security, like concerts, school shootings and workplace incidents.

His biggest challenge “is people,” Jones says. “Recruiting and hiring the right people.”

Last year the company interviewed thousands, but only a fraction made the cut.

“We are looking for applicants with the right background and qualifications,” said Jones. “It’s tough because of the tight labor pool. But we have created initiatives like our recruitment program, Partners In Employment Community-Based Program, and will be adding others to attract candidates, such as veterans, students and older adults seeking a career in security.”

Jones described himself as a manager as being “highly results driven” and “a believer in strong relationships.”

I love asking people about where they grew up and what they did in high school.

The ability to connect with people.

The threat of something happening to people and the people we employ.

What do you wish you knew five years ago that you know today?

I wish I had known to surround myself with better people.