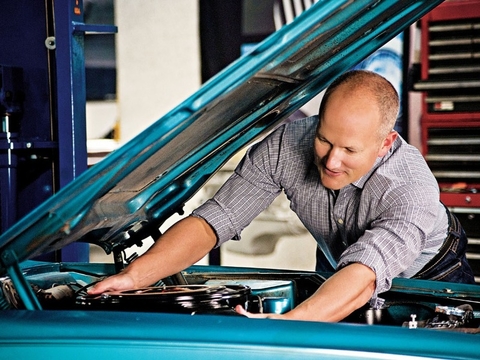 McKeel Hagerty knows classic cars inside and out. (Hagerty)

McKeel Hagerty, CEO of Hagerty, scoffs at the notion that the future will be all about driverless cars.

“There will always be people who enjoy cars and want to drive,” Hagerty told FierceCEO.

And his company insures them—ranging from $40 million and up European race cars circa the 1950s and 1960s, to entry level enthusiast vehicles starting at around $3,000.

Parts, not so tough

It might be thought that it would be hard to turn a profit writing this kind of insurance given a scarcity of parts for vintage cars. But getting parts for cars that haven’t been made in decades is not as hard as one might think, Hagerty said. “You’d be surprised at people’s ability to find things.”

Parts can also be fabricated using modern technology, he said.

The company was started by Hagerty’s parents in 1984 as an insurer of wooden, classic boats. In the early 1990, the business got into classic cars and in 1997, McKeel Hagerty took over as CEO.

Had aspirations to be a priest

Hagerty was set against following his parents into the business initially. He first studied to be a priest and then a philosophy professor, but he hardly expresses regrets about his ultimate choice.

The company now has offices in the U.S., the U.K., Canada, and Germany and has hired 120 employees so far this year, Hagerty said.

Hagerty said he prides himself over the company’s “unique approach to business, which fosters a positive, challenge-embracing growth mindset among employees.”

Owns a fleet of classic cars

And Hagerty loves his cars. On his days off, Hagerty said he can be found tooling around in one of the 25 classic cars he owns. Hagerty’s first car is a red 1967 Porsche 911 S that he paid $500 for when he was 12 and restored with his dad. He still has the vehicle. On the flip side is his 1930 Ford Model A, which he also drives to work.

His favorite car? “It’s a sports car in general,” Hagerty said. “But not one in particular. Every car has different characteristics. It just sort of depends on the mood you’re in.”

And if you’re wondering about which of this year’s models are going to be tomorrow’s collectibles, Hagerty has put together a list.  "We look for vehicles that push boundaries and beg to be driven," he said.

Digging deeper into your current market.

We had to adapt the business to be a place millennials want to work in.

Real investment in their development.