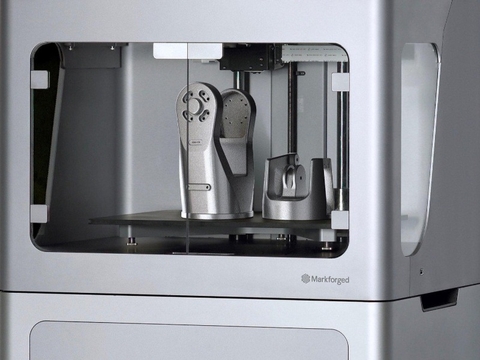 Greg Mark, CEO of Markforged, is taking building to a whole other level.

His Cambridge, Massachusetts, startup creates and sells 3D printers, which print in carbon fiber or metal, to create everything from car door handles to drive shafts that hold railroads on their tracks. And depending on the need, the company's printers sell for as little as $3,500.

Mark, a mechanical engineer, started his career designing and building different gadgets like aerodynamic wings on the back of Ferraris and shoe guards to protect against water soaking into wearers' socks, trying to see what would stick.

In 2013, Mark’s friend lent him a 3D printer to tinker around with. After doing some research, Mark realized that the 3D printing industry had hit a plateau: The materials being used for printing were great for concept design but not for practical use.

“The potential was there, but it was only being used to create prototypes instead of real parts that could be used to make end use products in pretty much every industry,” he told FierceCEO.

From there, Markforged was born to address this opportunity.

“Now we have access to 3D printers that can quickly make industrial-strength parts,” Mark said. “It’s easy to go from an idea to an actual product.”

Traditionally, a part is sent out to a machine shop and the turnaround takes four to five weeks, he said. With Markforged, same-day completion is possible.

Markforged is funded by $57 million from venture capital and strategic investors including  Microsoft, Porsche and Siemens.

One major advantage Mark feels he has is timing; the market was ready for this innovation. Markforged turned its first profit in the second quarter of 2017, and is still expanding. The company has 150 employees and is growing at a pace of 240% year over year.

As Markforged has grown, Mark said he is working hard to instill a company culture. That starts with onboarding. Every two weeks, he spends a day and a half “showing new employees how we operate,” Mark said.

The onboarding includes a tour of the entire building with an explanation of what is going on in each part.

Every Monday, the company has an all-hands meeting where an update of operations is given. Different departments provide their own update.

“How do you preserve what got you here at this growth rate?” Mark said. “Love for your employees and customers and passion for your business.”

All my life I loved building things and you have to engineer the company around it.

What is your favorite question the ask on a job interview?

I like to know how people found us and what they knew about the company coming in.

Making sure in this era of hyper growth that we don’t lose sight of products, customers and people.

What is the key for revenue growth?

Moving fast and not breaking things.

What do you know now that you wish you’d known five years ago?

Growth comes really fast. If I knew how fast, I would have been more aggressive with hiring.