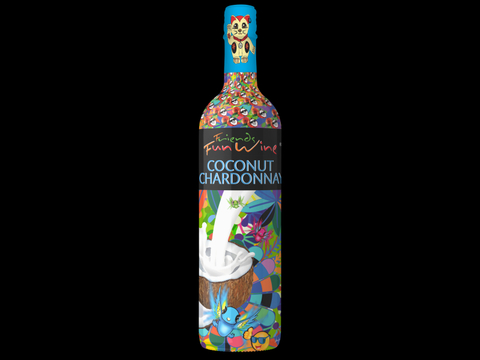 Joe Peleg, CEO of Friends Fun Wine, is building a low alcohol empire one sip at a time. He has created an array of six wine drinks that have around 6% alcohol content, which is about half the content of standard wines.

The reasoning is to create a new category that will appeal to people who like wine but want a lighter taste, flavoring and buzz when they imbibe. His target audience is mainly women and millennials.

As for his product being a competitor to beer, “100% yes,” he said. “Fun wine is between beer and wine.”

Already out are six offerings that include sangria, coconut, two coffees, and strawberry and peach Moscato. An apple cider-flavored wine will join the ranks early next year. The alcohol content ranges between 5.5% and 6%, compared with standard wine, which is about 12% to 14%.

Peleg says his wines are different from the wine coolers that were once popular because they had juices in them and an alcohol content of about 3%.

Since starting the brand five years ago, Fun Wine has expanded into five continents. Peleg targets the lower end retail market, not liquor stores. For instance, in the New York City area, Friends Fun Wine is available at K-Mart and supermarkets Shoprite Gristedes and D'Agostinos, as well as 40 independent grocers. Fun Wine is also available at 7-Elevens in North Asia.

“Wine has always been considered something high class,” Peleg said. “I want to make it a daily basis beverage.”

The wines come in Red Bull-sized cans, selling for about $1.99, and regular-sized wine bottles costing between $7 and $9 will be rolled out next year. In March, Friends Fun Wine will introduce aluminum bottles that are a little bit smaller than beer bottles.

Also next year, production will begin in Latin America, adding to locales in Germany and Austria.

The biggest challenges Peleg has faced are in creating a new category, “building understanding,” getting the product into new countries and having distributors give attention to the product.

Another challenge has been Fun Wine’s need to educate consumers around the product and the category, Peleg said.

Peleg said he needs to understand the desires of the market, and his vision is to be in all outlets that are selling beer, such as convenience stores and supermarkets. Even possibly, someday, McDonald’s and Burger King.