Entrepreneurs are creating businesses at fastest clip since 2013: report 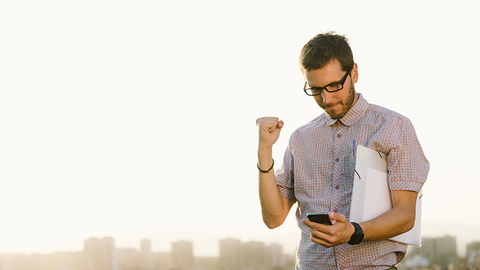 Entrepreneurs have started the year starting up companies. (Getty Images/Dirima)

A survey shows entrepreneurs are starting new businesses at a rapid clip, aided by tailwinds from a strong economy and a tax law favorable to new enterprises.

In the first quarter, job seekers began new businesses at the highest rate, 8%, since the fourth quarter of 2013, when 8.6% of job seekers started a business, according to a report from outplacement firm Challenger, Gray & Christmas.

The 8% is up from 5% of job seekers who started new businesses in the last quarter of 2017.

“We tend to see an increase in startup activity when confidence is high,” said Andrew Challenger, vice president of Challenger, Gray & Christmas, in a statement. “The current job market is such that a failed venture does not necessarily spell total joblessness for the entrepreneur, as companies are scrambling for talent.”

The first-quarter startup rate was significantly higher than the same period in 2017, when 4.4% of job seekers opted for entrepreneurship. The startup rate remained low through the first half of 2017, hovering near 4% before ticking up to 6.7% in the third quarter.

“Access to loans certainly plays a part in deciding whether to start a new business, and lenders have been consistently making cash available to entrepreneurs in recent months,” said Challenger.

Lenders are indeed doing their part to get these businesses off the ground, according to measures of credit availability.

Institutional lenders reached a new index record of 64.5% in March, up one-tenth from February, according to the latest small business lending index from online lending marketplace Biz2Credit, which analyzed feedback from 1,000 entrepreneurs. These lenders (pension funds, insurance companies and others), continue to be important players in small business lending, their activity shows.

"Institutional investors continue to gain traction in the small business credit marketplace," said Biz2Credit CEO Rohit Arora, in a statement. "Just a few years ago, they were not very involved in small business loans, but they have learned that it is quite profitable and the risks of default have been quite low. These lenders offer attractive interest rates and terms."

Big banks, with assets of over $10 billion, are granting more than one-quarter of the small business loan applications they receive. The 25.5% approval percentage, up 0.1% from February 2018, represents a high point for big banks.

"With the Federal Reserve's continuing path of interest rates increases, small business loans are becoming more and more profitable,” Arora said. “A small rate hike means tens of millions of dollars in profit, since the big banks cost of capital has not changed. Big banks have a larger deposit base, and they can be more aggressive in lending, especially in a strong economy."

And small business loans are also being given to help startups.

As of the week ending April 13, lenders had approved $8 billion in loans to new businesses, 77% more than the $4.5 billion lent through the same period last year, according to the Small Business Administration.