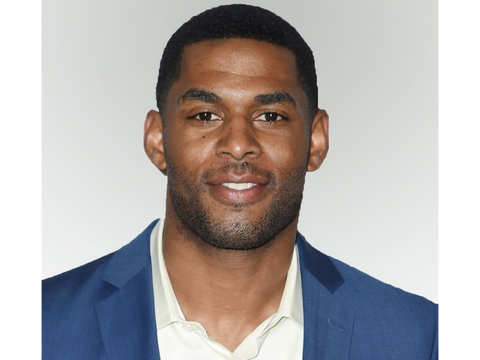 Marques Colston has buying on his mind. (Image: Dynasty Digital)

Dynasty Digital CEO Marques Colston went from the professional football field to the fast track as a successful entrepreneur and says he’s not done yet.

Colston played for the New Orleans Saints his entire NFL career, helping them win Super Bowl XLIV, when he led the team with seven receptions for 83 yards against the favored Indianapolis Colts.

Even while playing pro football, Colston was investing in a number of sports performance and health and wellness startups. While Colston’s leanings were generally sports-related, he found himself “migrating toward digital” in the last year and a half, becoming CEO of Dynasty Digital, which started operations last year, he told FierceCEO.

There is also Dynasty Sports Group, which offers digital innovation to sports teams, and Lexaria Bioscience, a research company studying new delivery mechanisms for edible cannabinoids and other bioactive molecules.

He first started putting that interest into play in 2012, when he was still with the Saints. Colston looked into an indoor football team, starting as a passive investor with one partner, then buying him out.

He went on to take stakes in, among others, Sports Testing, Inc., and Enerskin, a high-performance compression company.

Colston is driven to be an entrepreneur by “the challenge,” he said. “It really revolves around that.” It’s also “just the way I’m wired,” Colston said. “I like to roll up my sleeves and get to work.”

The key to his success “has been to work with what I am already aligned to,” Colston said. “This way I walk in the door and have a base of knowledge.”

Next on the docket for Colston is an Executive Education program he cofounded at Columbia University Business School, focused on providing current and former professional athletes with the tools needed to harness their competitiveness and ensure financial success after their athletic careers have completed.

The program launches this month with the “Venture Investing for Professional Athletes” and its curriculum includes: The basics of private equity investing; expected returns from startup investments; valuations and negotiation strategies; differences between angel investing and venture capital; portfolio theory; and understanding entrepreneurial finance, growth hacking, and securities.

Colston is also the top consultant for the Center for Innovation for Virtua Health Systems, a nonprofit healthcare system in southern New Jersey that operates a network of hospitals, surgery centers, physician practices and fitness centers. It is also a research hub for emerging medical technology.

As for the future, it will be growing the existing companies he has a stake in and adding others, Colston said.

A willingness to learn.

What is a chief opportunity for revenue growth?

Being able to master a skill set.

Opportunities and how to take advantage of them.

What is one tip for motivating employees?

Building a culture you want to be a part of.

What do you know now that you didn’t know five years ago?

How to better leverage the brand for marketing opportunities.