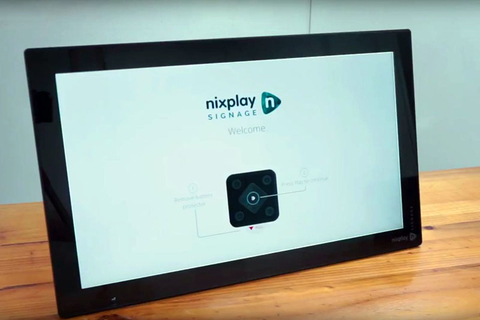 Mark Palfreeman is behind many of the digital signs that are becoming more abundant. (Nixplay Signage)

When you walk into a department store, there is a good chance the digital sign that beckons you with sales has been supplied by Nixplay Signage.

The CEO behind Nixplay is Mark Palfreeman, who has taken his love of all things digital and created two business operations. One is digital signage, which is becoming ubiquitous, showing up everywhere from 7-Eleven to Marriot Hotels to Boeing Aircraft interiors. The other is digital framing, where pictures exist in a cloud and can be sent to, and shared all over the world through mobile devices.

Both businesses are doing well, Palfreeman said, and the company is about to open its third location, in Silicon Valley. It already has offices in the U.K. and Hong Kong.

Palfreeman chose his digital career after working at Merrill Lynch and producing films with Fox2000.

“I get very bored very quickly, but in the industry I am in now everything keeps changing,” Palfreeman said. “It’s exhilarating being in a factory and seeing hundreds of thousands of products you designed coming off the line.”

From his perspective, it was all about celebrating digital content that isn’t owned by a corporation (unlike movies and music). Photos seemed like the perfect fit, and by focusing on selling direct to market, Palfreeman found a simple model for a digital photo frame business. With little capital and no engineering background, he began by shipping 55 frames himself.

Palfreeman also recognized an opportunity to offer his products in an enterprise setting, popularly labeled “digital signage,” a $20 billion industry. He said research indicates the displays garner 400% more views than traditional signage and are especially appealing to businesses that have been priced out of the industry.

The eight-year-old company is profitable, according to Palfreeman, with the digital signage part of the business more profitable. The signage business is being built out and he also feels that “We will dominate the digital photo space.”

Employees are majority shareholders and revenue growth has mainly been organic, from proceeds of the sale of a small part of the company and through one venture capital investor.

“There are moments of sheer exuberance and other times you can be in the trenches,” Palfreeman said. “But it’s always rewarding.”