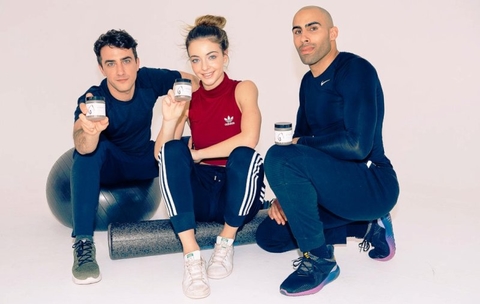 Two millennial entrepreneurs are targeting their own demographic with a dietary supplement. (VitalFit Nutrition)

Do you want an active lifestyle? There's a pill for that

Are you sad, tired, sick to your stomach, in pain or allergic to pollen? There’s a pill for that. According to the Washington, D.C.-based trade group, the Council on Responsible Nutrition, more than two-thirds of American adults—over 170 million—take dietary supplements alone. And that’s not counting all of the prescription pills we pop each day. And now, two more entrepreneurs have jumped into the dietary supplement sector—which contributes roughly $120 billion to the U.S. economy annually. Alfred Schofield and Cameron Fisher realized that they wanted to innovate in the supplement industry during the second semester of their one-year graduate program at Babson College in Boston. Today, they are the co-founders of VitalFit Nutrition, a Boston-based 2016 startup that sells natural supplements to people age 25 to 35 to help them “optimize” their lifestyles, according to a report by AmericanInno. The company is currently working with fitness instructors to test its first product—Tart Cherry, a plant-sourced capsule that should help active millennials recover from a session on the treadmill or a long, active workday. According to Schofield, he saw a business opportunity after trying a tart cherry juice recommended by his parents. After a few hours, he said he felt a lot better, but added that the amount of sugar in the juice was not compatible with his diet. That’s why Tart Cherry is in capsules (60 capsules are sold for $45). Future plans include an expansion to New York City and introducing the VitalFit products nationally. (AmericanInno)

SCORE, a nonprofit group dedicated to helping U.S. small businesses get off the ground, grow and achieve their goals through mentoring, has announced the winners of the 2017 SCORE Awards, which annually recognize outstanding examples of successful, innovative SCORE mentees, as well as important advocates for small business. U.S. Senator Shelley Moore Capito (R) of West Virginia will receive the Senate Small Business Champion Award and Representative Tom Graves (R) of Georgia will receive the House Small Business Champion Award. As SCORE's top small business awards, these are presented annually to members of Congress in recognition of outstanding advocacy and action, both within Congress and beyond, on behalf of small businesses nationwide. "This year's SCORE Awards are a true celebration of the American entrepreneurial spirit," said Resa Kierstein, vice president of development for the association, in a formal statement, “but each embod[ies] the courage, perseverance, and vision necessary to create successful small businesses. A special thanks as well to our SCORE Awards sponsors, who strengthen our efforts to educate, support and advocate for the millions of entrepreneurs pursuing the American dream." (SCORE)