CEO out to revolutionize computing with gesture-controlled device 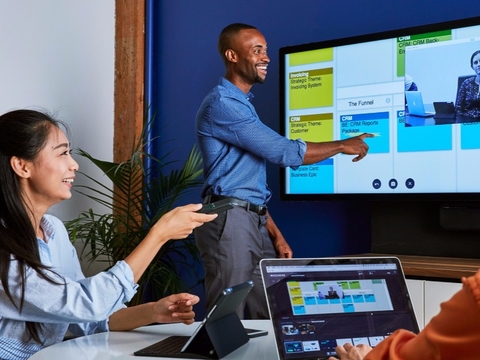 This computer screen is moved by pointing at it.

John Underkoffler, CEO of Oblong Industries, is out to make computer use as we know it revolutionary.

He is the mind behind the gesture-controlled computer in “Minority Report” and “Iron Man” and has now commercialized the product so that it is no longer just a movie special effect.

Over 100 companies use the system, including IBM, GE, NASA, PwC, Fujitsu, Accenture and Wells Fargo. It is used for everything from operations centers to meetings that allow more than one person to work on the computer at once, pointing to make changes from anywhere in the room. The premise is that collaboration is the best way to produce results by being able to see and work on the same thing at the same time.

Oblong is funded by private investors, having just received its latest round of capital, $65 million.

The system has come a long way since he developed it in the 1980s in the MIT Media Lab. And that development and its ongoing upgrades have been his biggest challenge, “Offering something generally new to the world, the first multiuser computer.”

Underkoffler didn’t start out as a computer scientist. He was greatly influenced by a chemistry professor he had in high school. But he also had a deep interest in personal computers and followed that road.

His parents didn’t try to sway him in either direction. “They offered warm encouragement,” Underkoffler said. “They didn’t push me into a profession.”

He has aspired to carry that warm encouragement as a leader, prizing “humility, openness to learning and a sense of humor.”

The company’s values also reflect the approach. Since Oblong Industries’ inception in 2006, the credos have been sincerity, passion and respect for each other and customers.

Employees must also have passion, “in this job and this company,” Underkoffler said.

He also looks for “hybrid people” when hiring, meaning someone with a formal engineering background and design skills, or graphic designers who have learned programming.

He adds: “We also want people who like to laugh.”

While he has had a lot of successes, Underkoffler does feel he did make a mistake by waiting too long to build the system. Still, based on progress to date—including recently launching a smaller version—he is making up for lost time.