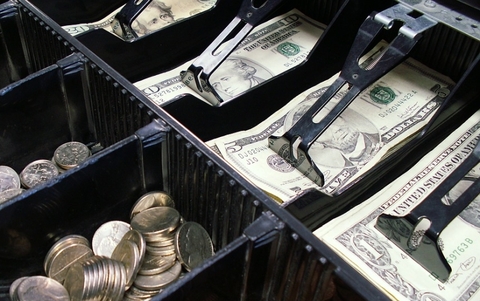 Card technology and digital payments hope to create a culture where cash is no longer king.

Visa is inviting small business restaurants, cafés, and food trucks to “cash in” on a golden opportunity. On July 12, the San Francisco-based payments company announced that it would award 50 eligible U.S.-based small business food service owners up to $500,000 if they committed to accepting only cards from their customers in compensation for the refreshments they sell.

Aiming to create a culture where cash is no longer king, the The Visa Cashless Challenge promotion will offer merchants the opportunity to accept all forms of global digital payments.

“At Visa, we believe you can be everywhere you want to be, and that it should be easy to pay and be paid in more ways than ever—whether it’s a phone, card, wearable or other device,” said Jack Forestell, head of Visa Global Merchant Solutions. “With 70% of the world, or more than 5 billion people, connected via mobile device by 2020, we have an incredible opportunity to educate merchants and consumers alike on the effectiveness of going cashless.”

In fact, Visa said that the company recently conducted a study that found that, if businesses in 100 cities were to transition from cash to digital payments, their cities would stand to experience net benefits of $312 billion annually.

Based on the study results, in New York City alone, businesses could generate an additional $6.8 billion in revenue and save more than 186 million hours in labor by making greater use of digital payments. This amounts to more than $5 billion in annual costs savings for businesses in New York. The complete results with the benefits of going cashless for businesses will be included in the “Cashless Cities: Realizing the Benefits of Digital Payments” report that will be released by Visa later this year.

To showcase the benefits of going cashless, Visa will tap into its sponsorship as the official payment partner of Formula E to offer cashless digital payment acceptance at the first-ever Formula E race in Brooklyn, July 14-15—the New York City ePrix, an all-electric single-seater motorsport series.

In addition, local New York City restaurants, including 2nd City, Fish Cheeks, and Mulberry and Vine, are offering their customers cashless experiences during the race weekend. These participating venues are bringing to life paperless, seamless, and enhanced payment experiences for their customers over the weekend.

Will the challenge benefit the entire payments industry? According to July 13 comments by CBS News Financial Contributor Mellody Hobson, this is "a very small program, to start"—"keep in mind they have something like 30 million merchants that use Visa around the world"—but the idea is that Visa's "biggest competitor" is cash.

"Cash is still the number-one way that we pay in this country, and it's growing around the world. So it's not MasterCard that they're worried about or Apple Pay; it's cash. They want to take some of that business away from cash," Hobson said on CBS This Morning.

When people go cashless, Hobson said credit card companies and banks "absolutely" benefit. "Remember, every time we swipe, they get a piece of the action, somewhere in the neighborhood of 1% for them. More for American Express," Hobson said.

She also said contactless networks like Apple Pay and Google Wallet will reap the benefits as well, as more people invest in the technology to accept digital payments.