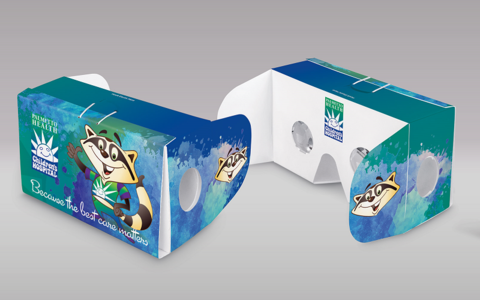 Unofficial Cardboard CEO Doug Oleff is helping to take virtual reality viewers into the next generation.

Oleff’s viewers, which are made of cardboard and held in front of the eyes, allow users to have an immersive experience of a place, like Italy, or a war battle, like Gettysburg.

Oleff bought the company for “in the ballpark of $1 million” a year and a half ago with proceeds from the sale of other businesses he owned, he told FierceCEO. Unofficial Cardboard has been around for four years, with its beginning years under different ownership.

The biggest users of the viewers are universities that load a 3D film in and take prospective applicants on a virtual visit. Other large users are advertisers and marketers that buy them for clients.

Professional sports teams will hand them out at games to give a virtual tour of the stadium, including the locker rooms and snapping through the tape along with the team as it enters the stadium.

“Many people think of big headsets costing $500 to $2,000,” Oleff said. “This is a cost-effective way to get virtual reality out to the masses of people wanting the virtual reality experience.”

Oleff owned preschools in Chicago and Las Angeles just before buying Unofficial Cardboard. Preschools capped the number of students, so he always knew what his income would be. With Unofficial Cardboard, “you have a new technology, an unlimited volume of sales and the potential for growth,” Oleff said.

Oleff and his partners have spent the last year and a half wringing out inefficiencies he said they found while doing their due diligence.

Oleff said freight charges have been reduced by 75% through consolidating printing, production and assembly.

He also said before he bought the company, marketing waited for inquiries to come in. Under the new Unofficial Cardboard, “We’re going to trade shows, events to tell the public what virtual reality really is,” Oleff said.

Oleff believes virtual reality will continue to grow and find many applications. He said it is already used by schoolchildren to connect with parts of history. In a test, people with Alzheimer's disease were shown Queen Elizabeth’s coronation using virtual reality and it allowed them to remember what was going on in their lives during that time frame.

To be sure, “There is competition out there,” Oleff said. “We’re going to provide the best quality and experience we can.”

When I was in college and started Balloonatics, which delivered balloon bouquets at the University of Illinois.

What is your favorite thing to do?

Trying to stay on top.

Where do you look for new opportunities for revenue?