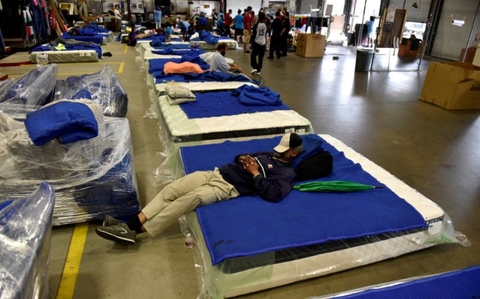 As many Houston-based commercial properties shut down and boarded up during widespread flooding this week caused by Hurricane Harvey, one local small businessman did the opposite: Jim McIngvale, known locally as “Mattress Mack,” welcomed area residents to take shelter at his two Gallery Furniture stores—and had taken in 400 wet and appreciative displaced people by Monday night, Aug. 28.

As the city started to flood, he posted a video on Facebook relaying a simple but compelling message: “Come on over,” NPR reported on its Morning Edition.

McIngvale even gave out his personal phone number, so that people could call him for help. Not only did hundreds of people arrive on their own, but the store owner sent out his furniture trucks to pick up stranded flood victims.

He has been providing breakfast, lunch and dinner to the evacuees ever since that day.

This isn’t the first or only time that McIngvale has opened up his stores and his heart. During Hurricane Katrina in 2005, he also opened his doors to 200 evacuees from New Orleans. In 2013, he was honored by former President George H.W. Bush and his wife, Barbara, with a Daily Point of Light Award for his decades of philanthropy.

“It is well known that Jim McIngvale never does anything small or halfway. When he’s in something, he’s in all the way,” Points of Light Chairman Neil Bush, the former president’s fourth son, said during the presentation, according to a story in the Houston Chronicle.

McIngvale also made headlines for losing an estimated $7 million worth of furniture after betting that the Denver Broncos would defeat the Seattle Seahawks in Super Bowl XLVIII in 2014. He pledged a full refund to customers who spent $6,000 or more at his stores during the two weeks before the game.