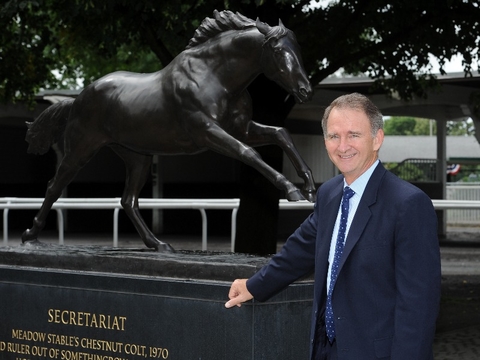 Chris Kay with a bronze of Secretariat, who won the Triple Crown in 1973. (New York Racing Association)

With the Triple Crown, formally known as the Triple Crown of Thoroughbred Racing, just days away, Chris Kay, CEO of Belmont Park and the New York Racing Association (NYRA), is feeling “great.”

It is at Belmont Park, the racetrack Kay oversees, that the final leg of the Triple Crown will be run. Already, contender Justify has won the first two legs of the triad: the Kentucky Derby and the Preakness Stakes, both last month.

Justify’s race is the third Triple Crown run that Kay—former COO of Toys R Us and The Trust for Public Land—has overseen since taking the reins of Belmont Park in July 2013, right after that year’s Belmont Stakes. He was simultaneously named CEO of the NYRA, the operator of Belmont Park.

Under his tenure, in 2015, American Pharoah won the Belmont Stakes and the Triple Crown. And in 2014, Triple Crown contender California Chrome came in fourth at Belmont.

But even though California Chrome did not win, the event ended up providing the NYRA with its first annual profit in 13 years—and sparked a sea change in the way Kay thought a racetrack should be run.

In 2014, Belmont’s Triple Crown experienced major overcrowding as 112,000 people filled the venue, and the day was declared a mess. Kay’s first move was to cap attendance at all future events at 90,000. He also said he “took immediate steps to revive the brand for a new generation, while tapping into the venerated tradition associated with a century and a half of racing.”

One step was the NYRA bankrolling $1 million of a new $5 million Long Island Rail Road sta­tion capable of serving Belmont’s crowds. The NYRA took the money from its capital improvement budget, and the LIRR paid the rest.

The NYRA is also involved with a major expansion planned for the park and surrounding areas, including a new sports arena for the NY Islanders. Hotels, restaurants and a 435,000-square-foot retail and entertainment complex are part of the $1 billion plan. While Belmont won’t be investing capital, the Islanders will lease 7 acres from the NYRA for the arena and a hotel, and an as-yet-undisclosed amount of land for parking.

“At the end of the process (which is several years off) we will have an integrated sports and entertainment district,” Kay said.

As for who will win the Belmont Stakes on June 9, “Justify will be the favorite,” Kay said, although that doesn’t necessarily mean the victor.

“You have three long races in a short period of time,” Kay said. “There may be other horses that are better rested.”

I was truly impressed by the work done by the CEOs of Universal Parks and Resorts [where he served in legal and international business functions] and Toys R Us that after I left Toys R Us I wanted to do things along the lines that they did.

What is a chief trait of a good leader?

A good leader needs to care as much about his or her people as he or she cares about their performance metrics.

What is your favorite interview question?

What is your favorite passion and why is that the case?

How can I make horse racing more intriguing and interesting to a new group of fans?

What are ways to develop new revenue?

Using technology in a way that allows us to interact with our customer base wherever they are and whenever they want.