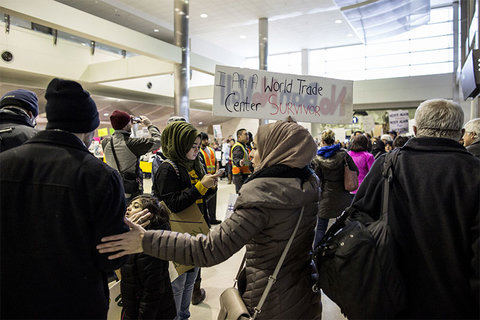 CEOs are not turning a blind eye to social and political turmoil. (Photo by Jeffrey M. Smith/The Times Herald via AP)

CEOs seem to be stepping onto center stage lately and letting it be known where they stand on political and social issues. It’s a risky move that threatens to turn off more people than it pleases, but the CEO as galvanizer is upon us.

The CEOs of Walmart and Dick’s Sporting Goods spoke out following the Parkland high school shooting on Feb. 14, and over the last couple of months Delta Airlines, United Airlines, Hertz, Allied Van Lines and about a dozen others have stopped offering special deals to NRA members.

“I highly support CEOs weighing in on political and social issues,” said Ken Lizotte, chairman of the CEO Club of Boston, a CEO support association.

On gun safety for example, “CEOs should view serious revisions to our current gun laws as providing for the safety of not only society as a whole, but as protecting their very own employees and customers,” Lizotte said.

“With gun violence breaking out in every conceivable business environment—movie theaters, offices, shopping malls, schools—no business is immune,” Lizotte said. “For CEOs then to ignore their responsibility to speak out and lobby for greater gun restrictions is an abominable abdication of the unspoken employer-employee social contract.”

No shortage of opportunities

“In today’s social and political environments, there is no shortage of opportunities for the CEOs of major brands to take a stance on charged issues, from racism to the environment to healthcare,” said Joel Benenson, CEO of Benenson Strategy Group.

“We found in our research that Americans almost unanimously believe that, given the challenges facing the country, it is important for business leaders to speak out,” Benenson said. “The good news for CEOs is that speaking out on these issues doesn’t appear to sway purchase intent, affect favoritism or produce a boycott effect or leave them vulnerable to other significant backlash. That’s true even among consumers who strongly disagree with the CEO’s views.”

But, there are still risks for CEOs who want to take a firm stance on a divisive issue, and they need to be prepared to manage any fallout that comes from it,” Benenson said.

“Yes, CEOs should take a stance on political or socially sensitive issues,” said Convercent CEO Patrick Quinlan. “That stance should be made thoughtfully and align with their organization’s values and mission. For decades, brands stayed silent on issues to avoid alienating or offending those who disagree. But in today’s world, consumers and stakeholders care more about business ethics than ever before. It’s riskier to stay silent than it is to take a stand.”

Why is that? “Much of the conversation around corporate activism has focused on risks, but consider the rewards,” Quinlan said. “Beyond the most important reward—positively impacting society—taking an ethical stance can positively impact recruitment, consumer perception, and brand legacy.”

In addition to potential employees, “this new generation of ethics-minded consumers want to align themselves with brands reflecting their own values,” Quinlan said. “They buy from brands that make positive ethical choices and avoid—or even boycott—those that don’t.”

“I don’t think of it as an obligation for CEOs to weigh in on all politically charged matters per se,” said Dustin Longstreth, chief marketing and strategy officer at CBX. “In fact, leaders must often resist the temptation to weigh in on certain topics or risk being seen as uniformed, out of touch, or simply exploitive for commercial gain.”

RELATED: The power of 'Thank you': Letting employees know they are appreciated goes a long way

Still, “I do consider is it vitally import that CEOs recognize the responsibility they have to the broader communities in which they live and the people they serve,” Longstreth said. “Weighing in on political and social topics of the day should be a carefully thought out decision.”

And “those who choose to stand for something larger than commerce, at some point, are sure to have those beliefs tested,” Longstreth said. “So, the point is not to ask whether or not you should dive into the controversial fray. It’s to ask yourself whether you’re willing to stand up for what you believe in when the proverbial push comes to shove.”

Connect it to your organization

When it comes to making public statements or actions about politically and socially sensitive issues “it’s always important to connect it back to your organization’s purpose, mission, and values,” Longstreth said. “Public statements rooted in a clearly understood and demonstrated corporate culture will be received as authentic, whether people agree with the statement itself or not.”

The current question of CEOs being involved in politics and social issues is not whether, but how, and to what degree, said John Paluszek, founder of Business in Society.

“So how to be effective in such corporate citizenship, with such corporate social responsibility,” Paluszek said. “Selectively, with the same prudence applied to the wide range of CEO decisions. At the bulls-eye of establishing priorities—issues that directly and significantly affect the company and/or its industry. Outward, sometimes overlapping, circles: broader social issues that have indirect but likely eventual impact. And, significantly, personal values shared with company leadership.”

Responding to a sensitive social or political issue isn’t as much an obligation of CEOs as it is an opportunity, said Leslie Crutchfield, executive director, Global Social Enterprise Initiative at Georgetown University’s McDonough School of Business. “And just as with every opportunity, there is risk.”

“It’s not an easy decision for any company to decide one way or another, especially in today’s political turmoil,” said Joel Klein, CEO of IMBC. “The truth is voicing your political opinion is good and bad for all businesses.”

The country “is so divided right now, people do appreciate a sense of honesty in a company’s values, but for those businesses that do feel inclined to share their political leanings, voicing this through social media tends to come off rather superficially,” Klein said. “I don’t suggest bad mouthing anyone in particular, especially via social sites, or even disclosing which party you are involved with, but instead focus on the topics that are being discussed within those parties.”

A CEO’s stance on controversial issues can really work for or against the company when it comes to sales, Klein said. “A study shows that 40% of respondents are more likely to buy from a company in which they agree with the CEO on issues. Although, 45% said they are less likely to buy if they do disagree, so it is important for companies to understand who their core audience is and what political standpoints will keep them safe and which can hinder business.”

A successful CEO “knows that, to experience growth and success, the organization must respect and value its customers, employees, and vendors, before profits,” said Donald Lee Sheppard, founder of Sheppard Associates. “Within this community, there will be many political and social positions represented or taken. So, the CEO should not take a political or social position, as it could run counter to many in this very important community. Instead, the CEO should have the courage and principals to stand up for the values the organization represents. That’s a position everyone in their community can support.”

“The CEOs in these cases stood up for their values and principles but chose not to take a political or social position,” Sheppard said. “Decency, as it always should, wins again.”

Christian Scarborough, president of Inventive Public Relations, said his advice “is for CEOs to stay out of politically sensitive issues.  CEOs' ultimate responsibility is a fiduciary responsibility to generate as much money as possible.  It’s the first rule of business and hugely important especially for investors or shareholders.  That being said, why would anyone want to alienate 50% of their potential revenue stream?”

And, “what usually happens is they say something that makes it worse or is taken out of context and now I am doing crisis communications rather than helping to advance a company, which by the way means securing people’s jobs,” Scarborough said.

John Baackes, CEO of L.A. Care Health Plan, said, “Most CEOs tend to be concerned about the risks of speaking out about a social or political issue related to their field, but as the CEO of the largest publicly-operated health plan in the country, I am more concerned about the risk of not speaking out, especially as the health care system that ensures health care for the neediest in our communities is under attack.”

But, “while I will take a stand on issues that will impact our members, I am also more than willing to have a constructive dialogue with those who are not on the same page,” Baackes said. “Through dialogue we are more likely to find a workable solution that will benefit the members we serve.”