Business community turns its back on Trump following Charlottesville remarks 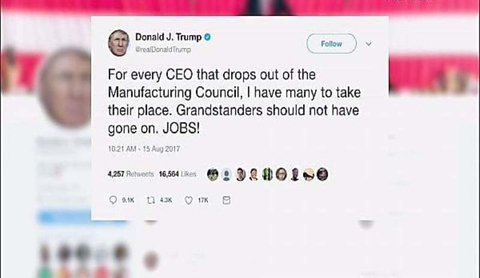 Trump was quick to say that all of the CEOs on his councils easily could be replaced. (Twitter)

Although President Donald Trump made it a point to look like he was showing the White House door to the CEOs on both his Manufacturing Council and Strategic and Policy Forum on Aug. 16, they already had left the building.

In a private phone call on Wednesday organized by Steve Schwarzman—the chief executive of the Blackstone Group and, according to CNBC, one of Trump’s closest confidants in the business community—the 12 members of the strategic council agreed to disband their group following the president’s remarks about assigning equal fault to the "alt-right" and "alt-left" for the violent confrontation in Charlottesville, Virginia, last weekend.

Disney CEO Bob Iger, Tesla CEO Elon Musk and former Uber CEO Travis Kalanick already had resigned from the forum before the call—and the others decided to go en masse.

"The thinking was it was important to do as a group," said the member of the advisory council. "As a panel, not as individuals because it would have more significant impact. It makes a central point that it's not going to go forward. It's done."

"There really was nothing to debate," said one member of the forum, who described the president's fiery Tuesday news conference as a "tripwire," according to a report by CNBC.

Dimon also noted that Trump's statement during the October 15 press conference, which placed blame on "both sides," was unacceptable. "There is no room for equivocation here: The evil on display by these perpetrators of hate should be condemned and has no place in a country that draws its strength from our diversity and humanity," Dimon said.

Shortly after CNBC and other news organizations had broken the news that the council was disbanding, Trump took to Twitter to say he was terminating both of the CEO advisory teams. By the time Trump made his statement, several executives had left the manufacturing group—following the leadership of Merck CEO Kenneth Frazier, who FierceCEO reported had resigned following Trump’s lukewarm comments on white supremacy.

In a tweet, the president said he decided to dissolve the groups "rather than putting pressure on the businesspeople."

The events mark the biggest falling out yet between Trump and corporate America, which largely cheered his pro-business stances when he took office.

Denise Morrison, the Campbell’s Soup CEO who had served on the Manufacturing Council, condemned the weekend event, as well as the president’s remarks, saying, “Racism and murder are unequivocally reprehensible and are not morally equivalent to anything else that happened in Charlottesville. I believe the president should have been—and still needs to be—unambiguous on that point. Following yesterday’s remarks from the president, I cannot remain on the Manufacturing Jobs Initiative.”

Trump was quick to say that all of the CEOs on his councils easily could be replaced. On Tuesday, he tweeted that he has "many" executives to take the place of the CEOs who step down from his business councils. "Grandstanders should not have gone on [them]," Trump added.