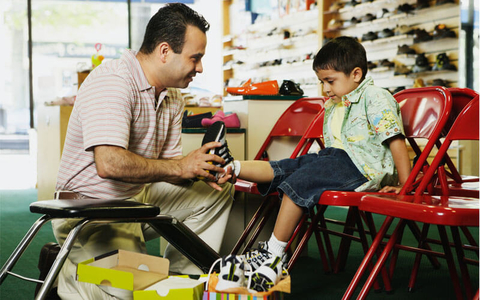 Retail revenue from Hispanics is down. (bst2012/Getty)

Retail sales to Hispanics are tumbling in part because some immigrants are staying home due to fear of immigration raids, according to a July 20 report by NBC News."There's almost a cocooning factor," Target CEO Brian Cornell, chief executive of Target, said at the Fortune Brainstorm Tech event July 18 in Aspen, Colorado. "They are staying at home. They are going out less often. Particularly around border towns in the United States, you're seeing a change in behavior." Cornell cited data by the research firm NPD Group, which found that purchases at certain retailers had fallen 8% in 2017. The drop was most acute in apparel and accessories, with a dramatic "high teens" drop in sneaker sales. Basketball, skates and running shoes took the biggest hits, although work and occupational footwear grew. In the previous year, Hispanics had accounted for 23 percent of all sneaker sales and nearly all of the sales growth. No other group saw similar drops. The Hispanic demographic is not to be overlooked—the group's buying power was $1.3 trillion in 2015, and it is projected to rise to more than $1.7 trillion by 2020, according to Nielsen. And compared to other groups, Hispanics spend the most on a daily basis. (NBC News)

These days just about every marketing campaign is geared toward Millennials. So it was only a matter of time until the generation got its own airline, according to a July 20 report by CNN Money. Air France on July 20 announced it will launch Joon, a new airline "aimed at a young working clientele, the Millennials (18- to 35 year-olds), whose lifestyles revolve around digital technology." Details about the new carrier are scarce, but it will start flying European routes from Paris Charles de Gaulle Airport in the fall and expand to long-haul flights in mid-2018, the airline said. (CNN Money)

Back to school means back to retail

This year, 89% of consumers are headed to their local shopping centers and malls to make their school supply purchases. What is at the top of their shopping list? Finding the best deals and promotions, according to results of a survey of more than 1,000 U.S. adults by the International Council of Shopping Centers. The poll found that the average back-to-school shopper is expected to spend $353.20, Chain Store Age reported on July 20. Parents of children in K-12 classes spent $309.60 on average, while those buying for college/post-secondary spent an average of $437.80. Fully 40% are procrastinating—and will wait to start back-to-school shopping until they see advertisements or sale prices in stores. Nearly 90% said they are influenced by promotions in terms of the amount they spend and the items they purchase. Discount stores continue to be the most popular venue for back-to-school shoppers (69%), followed by office supply stores (37%). Department stores (32%) will also see strong activity during the back-to-school season. (Chain Store Age)