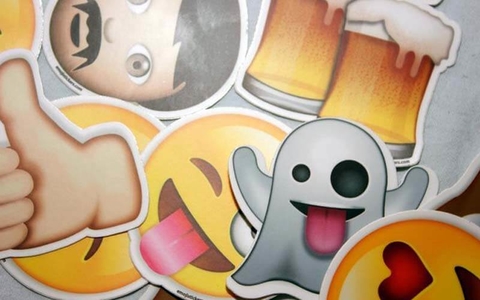 Emojis have seeped into mainstream culture, including the workplace. (Wicker Paradise/CC BY 2.0)

July 17 was World Emoji Day—a celebration that could not have taken place before 1999, when Shigetaka Kurita designed the first emoji for cellphones in his native Japan. But following Apple's 2011 decision to add emoji support to the iPhone, the symbols have seeped into mainstream culture the world over, with 2,666 official emojis in the Unicode Standard. And now brands are beginning to take serious notice. About 76% percent of Americans said they used emojis in business communications, according to a survey cited by The Atlantic. Why are emoji popping up at work? They soften a marketing message, or make it more cheerful and friendly. “People tend to use emoticons when there’s some kind of what linguists call a face threat—something kind of awkward or potentially offensive, or somebody could take something the wrong way,” Lauren Collister, a socio-linguist at the University of Pittsburgh, told The Atlantic. It is for this reason that the happy-face emoji dominates. Apple marked World Emoji Day by releasing preview versions of a few new emojis that will be part of iOS 11, which comes out this fall. These include a new dinosaur, a mushroom cloud-exploding head, plus a zombie, a zebra and some others. (The Atlantic)

Google operates an under-the-radar program aimed at harnessing the brain power of university researchers to help sway opinion and public policy, according to a July 14 report by The Wall Street Journal. In doing so, the Mountain View, California-based company is cultivating financial relationships with professors at campuses from Harvard University to the University of California, Berkeley. In fact, the business news source said, over the past decade, Google has helped finance hundreds of research papers to defend against regulatory challenges of its market dominance, paying stipends of $5,000 to $400,000. Some researchers share their papers before publication and let Google give suggestions, according to thousands of pages of emails obtained by the Journal in public-records requests of more than a dozen university professors. The professors don’t always reveal Google’s backing in their research, and few disclosed the financial ties in subsequent articles on the same or similar topics, the Journal found. (The Wall Street Journal)